Today we have an old video of Taarak Mehta Ka Ooltah Chasmah’s Disha Vakani which will force you to repeat her famous catchphrase Hey Maa Mata Ji! Disha Vakani became a household name after her successful stint in TMKOC. The talented actress left everyone rolling on the floor laughing with her perfect comic timings and acting skills. She not only made the character of Daya Ben loved by everyone but also compelled everyone to use her dialogues in certain situations. However, before getting famous with Daya Ben’s character Disha has done many small roles in tv serials and big banner movies like Jodha Akbar, Devdas, Mangal Pandey, and many more. 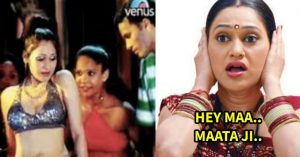 Disha comes from a Gujarati family from Ahmedabad and is a graduate in Dramatics from Gujarat College. After starting out with small roles Disha became part of one of the longest-running shows on Indian television I.e. Taarak Mehta Ka Ooltah Chasmah. Although, she took a maternity break from the show in 2017 and is been absent from the new episodes. The news of Disha taking a break from the show left the fans heartbroken and everyone is still waiting for her to make a comeback soon.

While Disha is staying away from the limelight but one of her videos from the past is making the headlines now. In the video Disha could be seen grooving to a remix of a folk song “Bhingari ga bhingari” and she could be seen rocking in a shimmery outfit.

Meanwhile, the fans and followers are asking the makers to bring back Disha to the show or replace her with any new actress. Do you think any other female actor would do the same justice to the character of Daya Ben as Disha did?