There are few personalities in Bollywood who have now achieved a great share of fame and success after struggling for a long time. One such talented person whose voice is a part of almost every film is singer Neha Kakkar. She not only adds value to any film with her songs but also is a judge on singing reality shows. 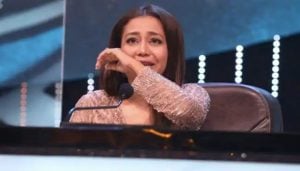 The star singer’s life has always been in the limelight whether it’s about her breakup with Himansh Kohli or marriage with singer Rohanpreet Singh, every news has to be covered. Recently the Singer ended up unfollowing many people on the Instagram handle and later shared an apology note for the same.

Neha took to her Instagram stories and shared a status, “Sorry…Finally decided to unfollow quite a few people on my Instagram coz of some really bad experiences in the past. Going to only follow those who I know or regularly meet or work with! Sorry if that made you feel bad! Have no grudges against anyone but such is life! We have to be really careful.” 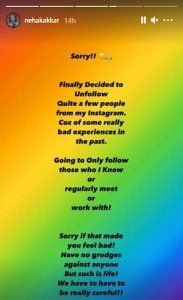 Although, Neha Kakkar was also in the news for her absence from the singing reality show Indian Idol 12 finale. If reports are to be believed then the singer wanted to spend some time with her husband Rohanpreet Singh at home instead of judging the show.

According to TOI “Neha has been judging Indian Idol for the past seasons and wanted to take a break. She has worked hard for many years and achieved a lot. She now wanted to spend some quality time with her husband Rohanpreet. That is one of the reasons why she did not continue judging Indian Idol after the team returned to Mumbai. Her sister Sonu has taken over and she will continue on the show till the end.”