Vicky Kaushal and Katrina Kaif had the most talked-about wedding of the year. The duo tied the knot on 9th December at Rajasthan’s Six Senses Barwara fort. The guests at the wedding had to follow many rules and regulations in order to be part of the celebrations. However, as soon as the couple tied the knot, Vicky and Katrina took to their social media platforms to announce their wedding by dropping gorgeous pictures along with a sweet caption. 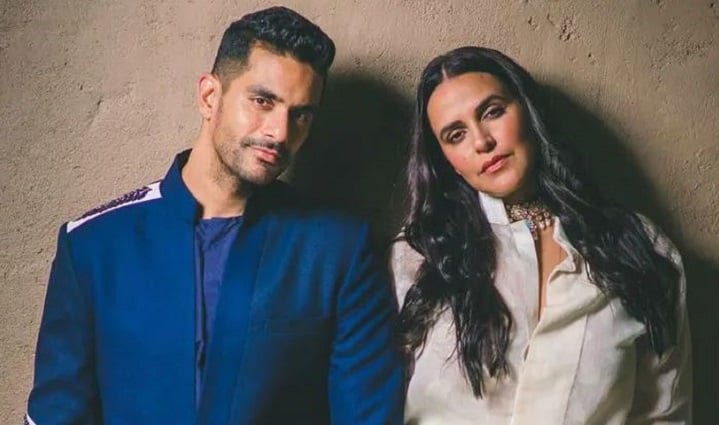 Later, the couple also posted pictures of their Mehendi and Haldi ceremonies on their respective pages. Now, after weeks of the wedding, a few celebrities who had attended the grand wedding are finally posting pictures from the events that took place. One such celebrity that attended Vickat’s wedding was Neha Dhupia who has now dropped pictures from the sangeet ceremony of the couple. Neha attended the functions along with her actor husband Angad Bedi and also shared her look of her for that day.

Taking to her Instagram handle, Neha shared an Instagram Reel in which she can be seen shutting and opening a door and unveiling her sangeet outfit. Neha wore an embellished velvet silk kaftan with shades of purple. She added shimmer with a choker, bangle, and a cocktail ring. In the caption, she wrote, “Mere yaar ki shaadi thi … #latepost of the most fun sangeet I have attended … had my dancing shoes on #vickat #ootd.”

Meanwhile, Vicky Kaushal recently uploaded picture of him hugging his wife Katrina Kaif on Christmas. The actor captioned the image as, ‘Meri Christmas’. There was news about a no-phone policy and plans to shoot down drones. But once the wedding got over, the couple mesmerized everyone with their breath-taking photographs from the festivities. And it’s safe to say that the wedding of the year certainly was that of Katrina and Vicky.