Everybody knows that Bollywood diva is a daughter of ace badminton player Prakash Padukone and has been a nation level player herself. Before coming to films and making her Bollywood debut with Om Shanti Om, Deepika has been a national level badminton player. And, it seems that the diva is now missing her game and has now finally started practicing again at the court. 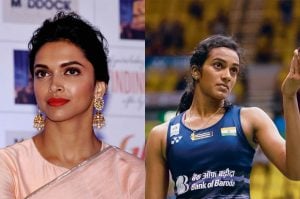 Recently, Deepika took to her instagram handle and posted a picture of her with champion PV Sindhu on the badminton ground. “Just a regular day in my life…Burning calories with @pvsindhu1 !” Deepika captioned the post.

After the ‘Bajirao Mastani’ actress shared the pictures PV Sindhu also quickly took to her instagram handle and posted the same images and wrote, “Good fun and good game in the end 🏸 @deepikapadukone when are we doing this next ?

The gorgeous diva quickly noticed the post and replied to the question asked by PV Sindhu in her post, “Good fun and good game in the end 🏸 @deepikapadukone when are we doing this next ?,” wrote Deepika.

Earlier, Deepika had also posted a selfie from her car along with a caption that read, “The post 🏸 glow!” To this, PV Sindhu replied, “After how many calories?”. It seems that the champ and the diva are trying to spend and up their game as much as possible.

On the work front, Deepika Padukone will be next seen in a cameo in ‘83’ which will be based on the life of cricket legend Kapil Dev. She also has many interesting projects in the pipeline including Shakun Batra’s untitled film where she will be sharing the screen space with Ananya Panday and Sidhant Chaturvedi. Apart from Hindi films, Deepika has also announced her Hollywood project which will be a cross-border romantic comedy.