Actress Kangana Ranaut is back with another controversial post and this time it’s about an advertisement featuring Alia Bhatt. In the latest bridal wear advertisement, actress Alia Bhatt could be seen playing a role of a bride who does not believe in the practice of ‘Kanyadaan’ (giving away the daughter to the groom’s family). 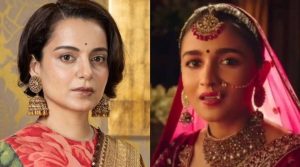 The Thalaivii actress took to her Instagram handle to share her views on the ad and wrote, “Humble request to all brands ….. don’t use religion, minority, majority politics to sell things …. Stop manipulating naive consumer with shrewd divisive concepts and advertising… #mohey @aliaabhatt @moheyfashion @stylebyami.” she captioned her post.

Kangana also mentioned about the putradaan in her post, “We often see a Martyr’s father on television when they loose a son on the border they roar don’t worry I have one more son, uska bhi daan main iss dharti Maa ko dunga… Kanyadaan ho ya putradaan (I will give him away for the protection of Mother Earth. Be it giving away one’s daughter or son)… The way a society looks at the concept of (lack of equivalent word in English or Urdu using) renunciation shows it’s core value system… When they start to look down upon the very idea of daan (charity/donation)… Then you know it is time for reestablishment of Ram Rajya…. The king who renounced everything he ever loved only to live the life of a Tapasvi (monk) Please stop mocking Hindus and their rituals…. Dharti (Earth) and woman both are mothers in scriptures they are worshipped as goddesses of fertility…. Nothing wrong in seeing them as precious and very source of existence (shakti), read the whole post”