The second wave of COVID-19 has been disastrous. The hospitals are running out of beds, oxygen concentrators and morgues and crematoriums are overflowing. We are struggling to fight this coronavirus pandemic and miserably failing at it. Yesterday, Taarak Mehta fame Bhavya Gandhi’s father lost his battle to this deadly virus after a whole month of struggle. He breathed his last at Kokilaben Hospital in Mumbai.

Bhavya Gandhi’s mother is shattered after this unprecedented happening. She shared her struggles in an interview with SpotBoye. “My husband took utmost precaution ever since this coronavirus came in last year. He not only used to maintain social distancing but his mask used to be always on. He used to keep sanitising his hands and the places he used to sit. Still the virus reached to him. A month back, he suddenly told me I am not feeling well from within so today you don’t stay in this room. Although he didn’t had any symptoms that time. Next morning when I went to check on him in the room he was having a minor fever so I immediately gave him a tablet (Dolo). In later half of the day he said I am feeling pain in my chest. So, I immediately took him to him for chest scanning wherein his reports 5% of infection was seen. So, doctor’s suggested me there is nothing to be worried you can isolate him in the home and medication can be done there consulting a specialist. We did that for two days yet he wasn’t getting relief”.

She had further added, “So we again consulted to another well known chest physician but his condition remained the same. We again got his ct scan done to understand if the medication is helping him from with in and unfortunately we learnt that the infection has doubled up and we have to admit him in the hospital. But I wasn’t getting any hospital. Wherever I was calling they were asking me to register in BMC and when our number will come they will call me. Due to Bhavya’s manager help, I finally found a bed for him at a hospital in Dadar. Where he stayed for two days and then there also doctors told me that he needs an ICU and we don’t have for now. So, please shift him to another hospital after which I had at least made 500 calls searching for the ICU bed. Right from hospitals to politicians to activists to NGO’s to my known ones and few family members also but I couldn’t find an ICU bed for him. Me and my family was devastated completely as we were feeling so helpless at that point of time. But due to God’s grace one of my friend finally managed to arrange for a ICU bed at a small hospital in Goregaon.” 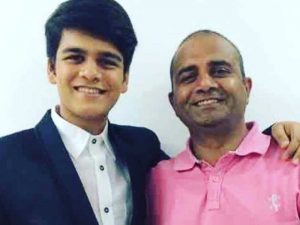 Further talking about her struggle to get an ICU bed she added, “The struggle didn’t end there as after my husband contracted coronavirus my elder son and daughter in law also tested positive for COVID-19. Both were under self-isolation and I had to be home for taking care of them. It was Bhavya who was running to hospitals and making arrangements for his father all alone. Doctor asked us to arrange Remdesvir injection and I litteraly paid cost of 8 injections for 6 injections. After that they asked me to arrange ‘Toxin’ injection and I feel so bad to tell you jo injection hamare India mein banti hai vo mujhe poore India mein nahi mili. I had to get it imported from Dubai and that to using source and paying 1 lakh for a 45k injection. But that injection also didn’t work for him. At last I had to shift him at Kokilaben, but they were not ready to take him as they said we aren’t taking COVID cases without BMC registration which broke me completely. They told me to take him away but where I would have taken him he was unconcious and on ventilator there was no hope left. I convinced them by showing his condition and after that they finally gave me an ICU bed. After which he stayed there for 15 days before he breathed his last, yesterday.”

May his soul rest in peace.