Ranbir Kapoor is in Chennai as he is promoting his much-awaited film Brahmastra with Nagarjuna and SS Rajamouli. It is known that Nagarjuna is playing the role of Ranbir’s father in the movie.

With the much-talked-about ‘Brahmastra’ release just weeks away, actor Ranbir Kapoor is leaving no stone unturned to promote the film. On Wednesday, he landed in Chennai. He was joined by his ‘Brahmastra’ co-star Nagarjuna and filmmaker SS Rajamouli. 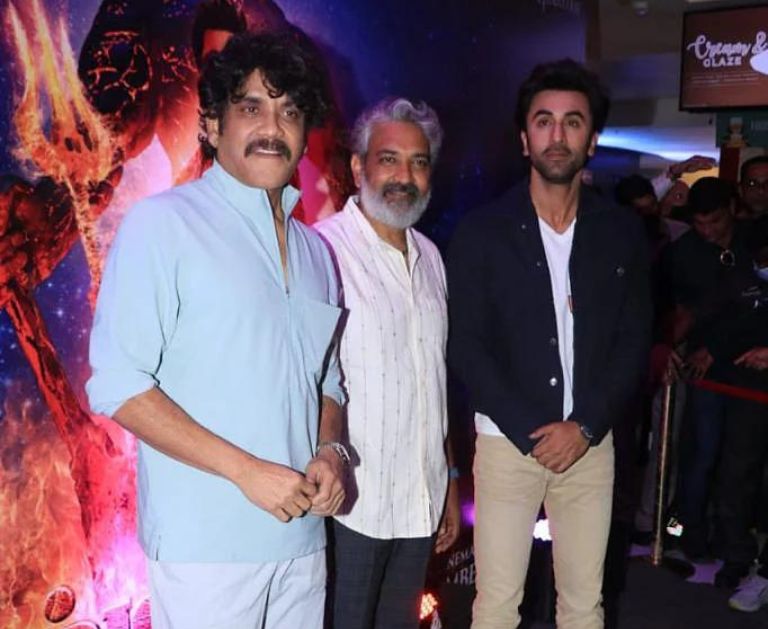 The blockbuster trio posed for the shutterbugs before kicking off their promotions in Chennai. Ranbir looked handsome in a white tee and beige pants paired with a black jacket. On the other hand, Nagarjuna wore a  casual light blue shirt and gray pants. SS Rajamouli wore an off-white shirt with black pants.

Ranbir, Nagarjun, and SS Rajamouli were seen relishing some of the traditional South Indian dishes in the city and the video of them eating on banana leaves with their hands is going viral. Everyone is praising actors and filmmakers for their simplicity, and there’s a reason why people can resonate with the South stars. The trio also enjoyed a hearty traditional South Indian meal after the campaign. 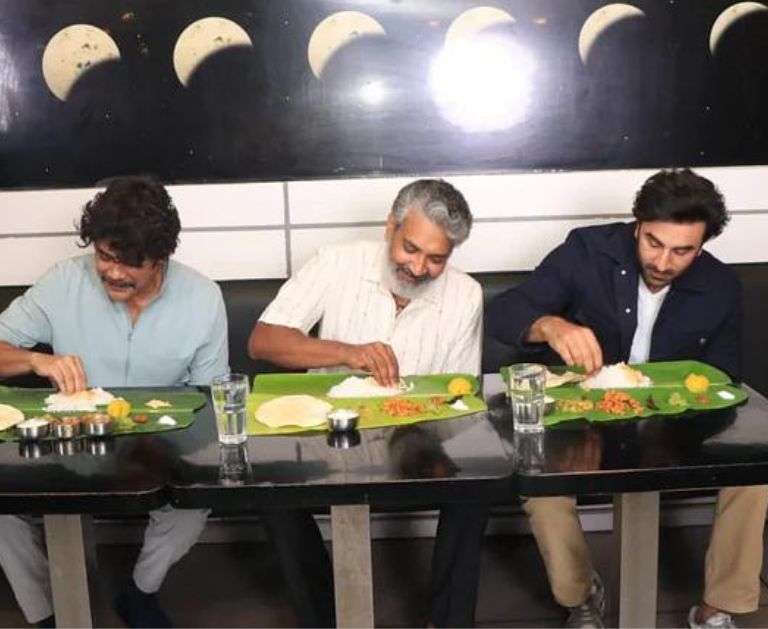 ‘Brahmastra’, which is touted to be a fantasy-adventure film, is directed by Ayan Mukerji. The film has been in the making for five long years, and after many delays, it is finally set to hit the silver screens on September 9. ‘Brahmastra’ stars Alia Bhatt, Amitabh Bachchan, and Mouni Roy. Not just this, superstar Shah Rukh Khan is set to play a cameo in the film and will be seen in a completely new avatar.

Arjun Kapoor Announces Mango Season Arrival By Hilariously Trolling Katrina Kaif; Promises To Eat Them With ‘As Much Love’ As Her
Geeta Basra Reveals Her Husband Harbhajan Singh’s Reaction When He First Saw Her, “Kaun Hai Ye Ladki”
Actor Amit Tondon Has Lashed Out At Mouni Roy For Using His Wife; ‘Don’t Want To See Her Face Ever Again’
COVID19: सिंगर कनिका कपूर के इलाज से खुश नहीं परिवार, कहा कनिका के इलाज में इतना वक्त क्यों लग रहा है
Bigg Boss 12 Winner Dipika Kakar To Give Price Money To Mother-In-Law, Plans To Buy This
Deepika Padukone Shares Her Relationship With In-Laws, For Ranveer’s Mom, She Is Her ‘Beti’
Here’s What You Need To Know When Planning Your Punta Mita Vacation..
Throwback Video: When Rani Called Now Enemy Aishwarya Rai Her Friend Forever
Forgot your Anniversary? Here’s How to Make up To Your Wife!