Laughter queen Bharti Singh and Haarsh Limbachiyaa are the happiest as the couple is soon to become parents. The duo is often seen sharing cute little banters and PDAs on their social media platforms that melt the hearts of the audience. However, recently the comedian shared a story on her handle which scared her fans and followers. 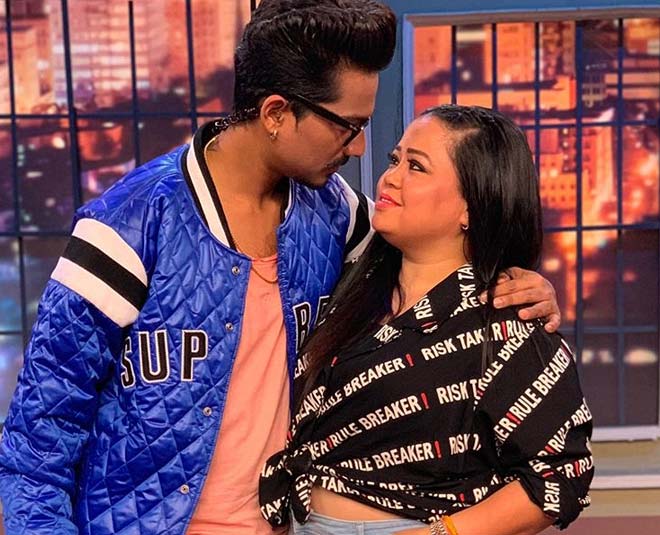 On sets of the reality show ‘Hunarbaaz’ Bharti shared two stories on her profile and mentioned that she has been scolded by her husband. In the first video, Bharti could be heard saying that her husband Harsh scolded her because she was about to fall. The comedian then panned the camera on her husband and Harsh then told Bharti that you can’t be so careless especially you are pregnant, “pit jayegi, next time aese idhar udhar ghumugegi toh ye sab nhi chalega,” he said.

In another video, Bharti could be seen saying sorry to her husband also lovingly forcing him to say sorry. The couple then kisses each other on camera. The video immediately received love from the fans and followers of the couple.

Apart from these two videos, Bharti Singh had even uploaded a funny video featuring none other than Mithun Chakraborty. In the video, Bharti has used a baby filter and can be seen talking to one of the judges on the show Mithun Chakraborty. Bharti after talking to the legendary actor then says ‘someone please change the diaper of the baby’. The video left everyone in splits and received hilarious comments from the fans of the actor. Actress Zareen Khan took to the comment section and wrote, “Sooooo cuteeeeee”. “Kya baat ha maza agya bharti ji” wrote another user.

Shilpa Shetty Broke Down After A Heated Argument With Husband Raj Kundra When He Was Brought To His House During Crime Branch Interrogation
Kunal Rawal’s Party Becomes Star-Studded With Malaika, Arjun Kapoor, Varun Dhawan And More; Watch!
When Jaya Bachchan Was Once Trolled For Her ‘Regressive’ Comments On Bahu Aishwarya Rai; Watch Video Here
Leaked Unseen Video Of Sushant Singh Rajput And Sara Ali Khan Smoking At Actor’s Pavana Farmhouse: Watch
Bigg Boss 12 Winner Dipika Kakar To Give Price Money To Mother-In-Law, Plans To Buy This
Deepika Padukone Shares Her Relationship With In-Laws, For Ranveer’s Mom, She Is Her ‘Beti’
Here’s What You Need To Know When Planning Your Punta Mita Vacation..
Throwback Video: When Rani Called Now Enemy Aishwarya Rai Her Friend Forever
Forgot your Anniversary? Here’s How to Make up To Your Wife!