Actor Anil Kapoor’s daughter and Sonam Kapoor’s sister Rhea Kapoor recently got married to her long-time beau, Karan Boolani in an intimate wedding. A few days ago the couple was spotted at the airport by the paparazzi as both were jetting off for their honeymoon in the Maldives. As soon as the love birds reached their honeymoon destination, Rhea posted a picture of herself chilling in a pool leaving the netizens stunned with her gorgeous avatar.

After dropping the first picture, film producer Rhea Kapoor took to her Instagram stories to share few more snaps of her with her husband Karan. In the pictures, Rhea could be seen wearing stunning Red Swimwear which she has paired with the black netted shrug. To finish her look she has added an oomph factor with her signature sunglasses. The location is simply mesmerizing and is definitely giving the viewer travel goals. 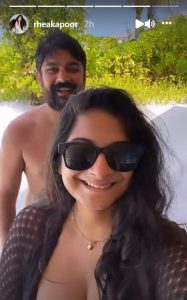 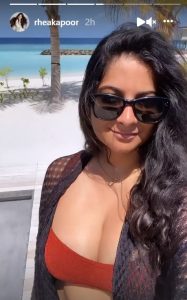 In one of the videos posted by Rhea, husband Karan Boolani could be seen in a goofy mood as the diva zoom in to his face and both start laughing. Rhea Kapoor tied got married to her longtime boyfriend at their residence on August 14. After which the Veere Di Wedding producer has been sharing a lot of adorable pictures of herself with her hubby.