KRK Trolled Deepika Padukone After The Release Of ‘Gehriyaan’ Trailer; Said, “This Is For Ranbir Kapoor”

The trailer of Deepika Padukone, Siddharth Chaturvedi and Ananya Pandey starrer film ‘Gheraiyaan’ has been released. In this film, bold scenes of Deepika Padukone and Siddharth Chaturvedi will be seen in full swing, whose glimpse has also been seen in the trailer. There are a lot of kissing scenes of both of them in the trailer. During this, the chemistry of both of them looks amazing. Fans are praising Deepika and Siddharth a lot. Not only this, but Ranveer Singh has also described the chemistry of Deepika and Siddharth as amazing. At the same time, now an actor and critic Kamal R Khan has also given his reaction to the trailer of ‘Grahiyayan’. 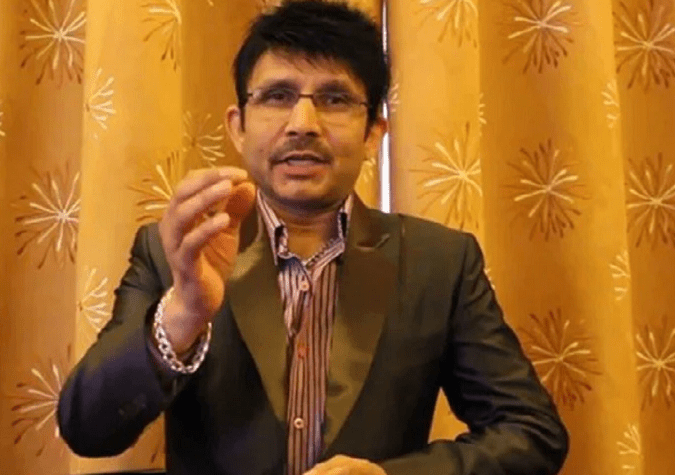 Kamal R Khan has tweeted, in which he has given his opinion on the trailer of the film ‘Grahiyayan’. During this, KRK has ridiculed Deepika Padukone. Not only this, but KRK has also dragged Ranbir Kapoor’s name while reacting to this trailer. Taking a dig at Deepika Padukone in his tweet, KRK wrote, ‘Ranbir Kapoor must have said to himself after watching the trailer of Gahriyaan, “thank you God. Saved by breaking up with Deepu. Otherwise, today such a respect would have been auctioned”.

Apart from this, KRK has also made a tweet, in which he has called the stars seen in the film shameless. He wrote, ‘Today I didn’t get time to review the trailer of shameless people’s film ‘Gahrahiyaan’ but I will review it tomorrow. These addicted bald people will never improve’. 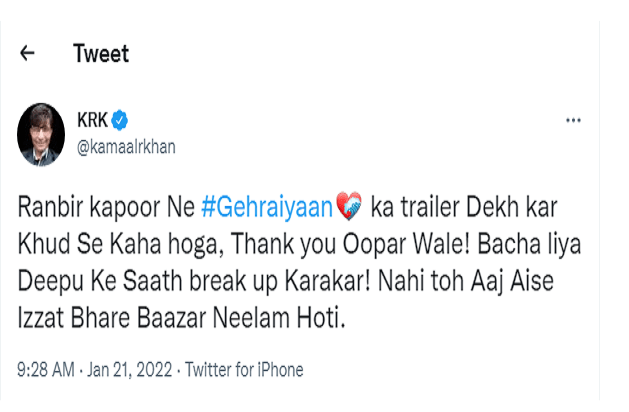 However, the trailer of Deepika Padukone’s film ‘Gehraiyaan’ has been very much liked by her husband Ranveer Singh. He gave his reaction to this trailer. Sharing a picture of Deepika Padukone on Instagram, he wrote, ‘Moody, sexy and intense, domestic no? Sign me too All of you are my favourites, Shakun Batra, Ananya Pandey, Siddhant Chaturvedi, Dhairya Karva, Naseerji the legend’.

Directed by Shakun Batra, this film will be released on 11 February 2022 on the OTT platform Amazon Prime Video. Apart from Deepika Padukone, Siddharth Chaturvedi, Ananya Panday, Naseeruddin Shah, and Rajat Kapoor will also be seen in important roles in the film ‘Ghehraiyaan’.