Choreographer turned filmmaker Farah Khan is known for her wit and great sense of humor. The talented director is in the entertainment industry for more than a decade now and she knows how to handle people who are little too obnoxious. Recently, Farha was seen in a trailer of a chat show called Pinch which is hosted by actor and producer Arbaaz Khan. Although the episode is yet to come what grabbed everyone’s attention was the witty nature of Farha Khan in the promo. The Main Hoon Na director, also the mother of triplets could be seen calling out the trolls who have body-shamed her and her kids Diva, Anya and Czar. 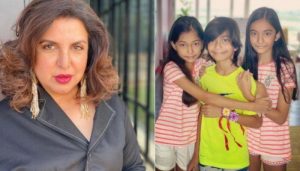 The chat show is famous for its segment when the stars or the guests are asked to react on the comments, made by the trolls on their social media handles. The director went ahead and read the first comments made by troll where she and her kids are body shamed. To this Farha said, “Sun, tu tere bachchon ko sambhaal, main mere bachchon ko sambhaal lungi (Listen, you take care of your kids, I’ll look after mine).”

The promo also shows Farha Khan addressing the trolls who have critised her for making Tees Maar Khan which stars actor Akshay Kumar and Katrina Kaif in lead roles. To this Farha said, “Bhai ab 10 saal ho chuke, ab tu aage badh (It has been 10 years, move on).”