The actress Zaira Wasim became a popular face because of her extraordinary performance in Movies like Dangal and Secret Superstar alongside Aamir Khan. However, the actress suddenly decided to quit films and start a new life. Now the young former actress has took to her Instagram handle to share her first picture after two years of bidding adieu to the showbiz industry. In the picture, Zaira could be seen donning a burqa and standing on a bridge. Zaira could be seen looking forward in the photo and hence her face is not quite visible. She uploaded the picture and gave it a short and sweet caption, “The Warm October Sun,” she wrote. 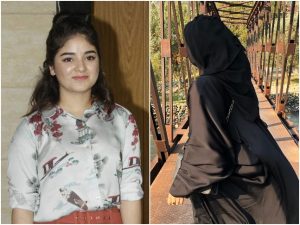 Last year, the former actress had requested her fans to delete all her pictures from social media as she was trying to start a new life. “Hello everyone!! I want to just take a moment to thank each of you for the constant love and kindness you have showered me with. Y’all have been a constant source of love and strength, thank you for being there to support me through everything (sic). I request you to please take down my pictures from your accounts and ask other fan pages to do the same,” she wrote.

The actress in 2019 announced that the entertainment industry and line of work is interfering with her faith and religion. After making up her mind, Zaira had quit Bollywood and her acting career and left her millions of fans heartbroken.