Arjun Kapoor Opens Up On Their Parents Divorce, Says, He Can’t Be Okay With Dad Boney Kapoor Leaving Mom For Sridevi, But Can Understand It

Boney Kapoor got married to Mona Kapoor(Arjun’s mother) when she was only 19 in an arranged marriage setup. The couple not only grew together but also their love for each other brewed with the passing times. But when rumors of Boney dating Sridevi went afloat Mona Kapoor was devastated. The duo got divorced and Boney went on to marry Sridevi who was already pregnant with her first child.  Arjun Kapoor recently opened up on how he can never be okay with his dad leaving his mom for Sridevi but now he has come terms to with it.

In 2018 after Sridevi’s mysterious death in Dubai Arjun Kapoor stood like a rock by his father Boney Kapoor and half-sisters Jahnvi Kapoor and Khushi Kapoor in their moment of grief. Talking about the same, Arjun credited his mother’s upbringing and shared that she had always wanted him to be a good son. 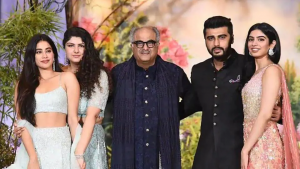 In an interview with Film Companion, Arjun Kapoor had shared, “My mother’s upbringing came in my head. She would’ve told me to be by my father’s side regardless of what obstacles we face, because of a choice he made where he fell in love. And I respect my father for falling in love again. Because love is complex. And we would be silly and churlish sitting here in 2021 saying that you only fall in love once. It’s very Bollywood-ised. Love is complex, love is complicated, love isn’t always about being in love.”

He had further added, It’s about compatibility, there is friendship, there is saturation. There is unfortunate frustration, people go through different phases in life. You could have been in love with somebody, and you can fall in love with somebody after that, and that has to be understood. I don’t agree… I can’t say I’m okay with what my father did, because as a child I felt the repercussions, but I understand it. I can’t say ‘theek hai, hota hai (It’s fine, these things happen)’, because I will always wonder. But when I rationalize it as an older person who’s dealing with his own relationship highs and lows, you understand.”

He concluded by saying his mother wanted him to be a good soon and added, “You try and be a good son because that’s what my mother would want.”