Shahid Kapoor Wishes Wife On Birthday With An Adorable Picture And Heartwarming Message; Check out The Details

Shahid Kapoor and Mira Rajput are one of the most adorable couples in Bollywood. Where Shahid comes from the world of cinema and glamour, Mira on the other hand comes from a humble family background yet the bond between the two is so strong that it always gives us couple goals. Recently, on the Birthday of Mira Rajput, her husband and Shahid Kapoor took to her social media handle to wish her in the most adorable way. 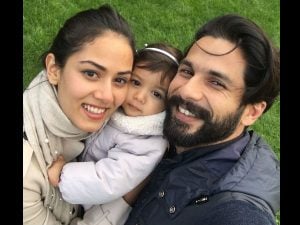 Shahid Kapoor is amongst the talented actors of the entertainment industry who has played the most complex characters in his career with ease. When it comes to his family life the star has always given his family equal attention as much as he gives to his work. While wishing his wife on her birthday Shahid posted a few pictures of them together and also gave a very heartwarming caption. “Not just to share your joys but to share your sorrows too. Not just for every day, we smile in each other’s arms but on the days we cry in each other’s arms. You are the center of my world. And I wouldn’t want it any other way. Happy happy birthday.”

In one of the pictures, Shahid could be seen tightly hugging her from behind while laughing their hearts out candidly. In another picture, Mira could be seen holding her husband closely and both can be seen smiling for the camera. However, what grabbed everyone’s attention was Mira Rajput’s brother-in-law Ishan Khattar’s comment. As he wrote, “Precious HBD ‘gaaaallll’ and thu thu to you 2.”

On the work front, Shahid Kapoor will be next seen in the movie Jersey. His last release was Kabbir Singh in the year 2019.