Rhea Kapoor Trolled And Called ‘Silly’ For Not Celebrating ‘Karwa Chauth’; Here’s How She Responded

Rhea Kapoor is in a blissful place as the boss lady has recently got married to her long-time beau Karan Boolani. The known producer and filmmaker, Rhea Kapoor who is also the daughter of actor Anil Kapoor had got hitched with Karan in an intimate wedding function at their bungalow in Juhu. Ever since the couple tied the knot, the much under the wrap relationship was being celebrated on social media platforms. Rhea and Karan were also sharing their pictures from the Maldives where the couple took off for their honeymoon. 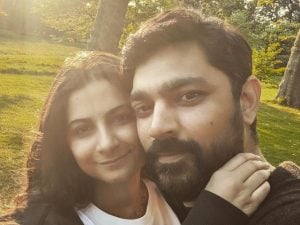 However, as the festival of Karwa Chauth is approaching, all the married women are looking forward to celebrating the occasion with their husbands. But, Rhea Kapoor does not seem to belong to the lot as she has clearly stated that she does not believe in the day. On Sunday, Rhea took to her Instagram handle and wrote a note for the brands to not contact her for Karwa Chauth-related collaborations. She also mentioned that Karwa Chauth’s spirit is something both Rhea and Karan does not agree with. 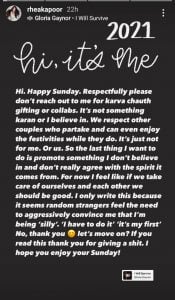 “Hi. Happy Sunday. Respectfully people don’t reach out to me for Karwa Chauth gifting or collabs. It’s not something Karan or I believe in. We respect other couples who partake and can even enjoy the festivities while they do. It’s just not for me. Or us. So the last thing I want to do is promote something I don’t believe in and don’t really agree with the spirit it comes from.” Rhea Wrote.

Although Rhea and Karan’s personal choice, did not go down well with the trolls and one of them called them ‘silly’.  But Rhea who is a headstrong woman and belives in giving befitting response to the trolls gave it back. For now I feel like if we take care of ourselves and each other we should be good. I only write this because it seems random strangers feel the need to aggressively convince me that I’m being ‘silly’, ‘have to do it’, ‘it’s my first’. No, thank you. let’s move on? If you read this thank you for giving a sh*t. I hope you enjoy your Sunday.”