Sara Ali Khan is often spotted in the city while going for her workout or events. Recently, when the paparazzi clicked her when she stepped out of the gym the video and pictures left everyone surprised. In the video shared by the paparazzi, Sara was seen posing for the cameramen stationed outside her workout studio. Then she sat in a small Maruti Suzuki Alto car and left. 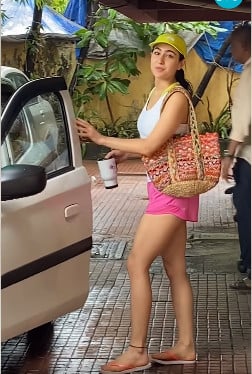 In the video, Sara is looking adorable in a white tank top and pink shorts. She is also wearing a cute yellow hat. The actress stopped and smiled at the paparazzi before leaving in the alto car. 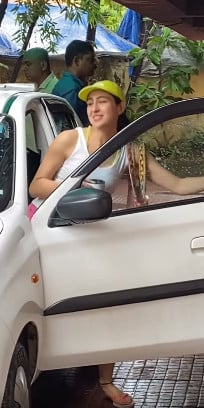 As soon as the video went viral the netizens were surprised to see the biggest actress traveling in a small car. While some netizens praised her for her humility, others trolled her for doing ‘Publicity stunt’. “ye sab publicity ke liye horha hai,” wrote one user, “mam apki dusri car hume dedo apko nhi chaiye to,” wrote another user, “they can go to any level may be making fun of others, “ commented a user.

Then a section of the social media users took Sara’s side, “she doesn’t care about the brand all she want’s is to travel simply,” wrote one user, “hats off to her without security she is traveling freely,” another user wrote.

On the work front, Sara had earlier finished shooting for an untitled film with Vicky Kaushal. The movie has been directed by Laxman Utekar and will be released soon. Recently, Karan Johar revealed Sara has signed two Dharma films for which she’ll start shooting soon.