Not Nick Jonas, Priyanka Chopra’s Family Wanted Her To Tie The Knot With This Actor, Deets Inside

Priyanka Chopra has emerged as one of the finest actresses of the Bollywood industry. She had debuted with the film “Hero” and since then there was no looking back for this talented actress. She has given so many hits like “Barfi”, “Fashion”, “Bajirao Mastani” and many more. Not only Bollywood she has many Hollywood films in her kitty too. The actress is married to singer and songwriter Nick Jonas and despite being ten years apart in the age gap the couple’s marriage is no less than a fairytale.

Nick and Priyanka got hitched after dating each other for almost a year. But there was a time when Priyanka’s family wanted her to marry television actor and “Devon Ke Dev Mahadev” fame Mohit Raina. In a throwback interview with Zoom TV, Priyanka had revealed her family’s fascination with Tv actor Mohit Raina and his impeccable acting skills and dashing looks.  They also wanted her to get married to him but things didn’t happen as planned and Priyanka fell for Nick and got married to him. 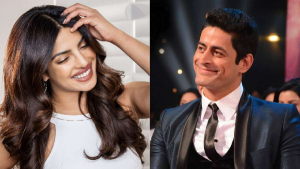 When Mohit Raina was told about it his reaction was just like any other fanboy. Mohit had stated that Priyanka is her favourite actress and what can he do “now that they are married”?

Talking about Priyanka Chopra and Nick Jonas the couple is having the happiest phase in their lives and their marriage just keeps getting better and stronger with each passing day.