Raj Kaushal left for heavenly abode after suffering a heart attack and his wife Mandira Bedi and children Vir Kaushal and Tara Kaushal are inconsolable and devastated. Raj passed away early on Wednesday morning and his last rites were performed later in the day at Shivaji Park crematorium. Raj and Mandira’s friends from the industry Rohit Roy, Dino Morea, Ashish Chowdhry, and many more stood like a rock by Mandira during her tough times.

The family also held a chautha for him in their residence yesterday. And now six days after his death, Mandira Bedi has finally paid silent tribute to her late husband Raj Kaushal. Mourning her husband’s death she removed her display picture on Instagram and adding a black screen. She also shared a happy picture of them which seems to be from one of their dinner dates and added a heartbroken emoji to it. Take a look: 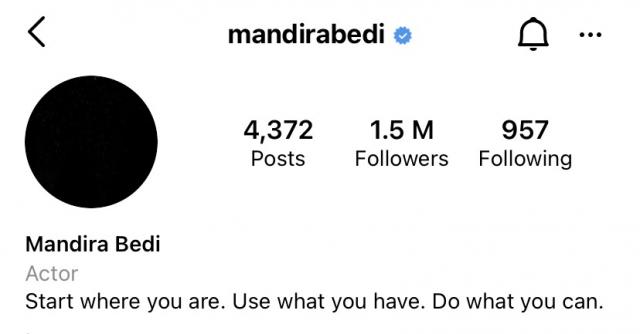 Talking about Mandira’s state after her husband’s untimely death Dino Morea had revealed, “Mandira was very distraught. I felt terrible just looking at her in that state. I will go to their house in the evening when she is a little settled. I will go and sit with her for a little bit.”