On August 20, 2022, a baby boy was born, bringing Sonam Kapoor and her hubby Anand Ahuja to experience parenting for the first time. With a sweet message, Neetu Kapoor confirmed this. After receiving a newborn boy on August 20, 2022, Bollywood actress Sonam Kapoor and her husband Anand Ahuja are overjoyed. Undoubtedly, their loving family is overjoyed by the news, and we were able to witness a lovely poster card on which her chachi, Neetu Kapoor, revealed the same. Sonam and Anand had made the news of her pregnancy public on March 22, 2022. They had posted adorable photos together in which the expectant mother could be seen sitting on the future father’s lap and showing off her adorable baby bulge. 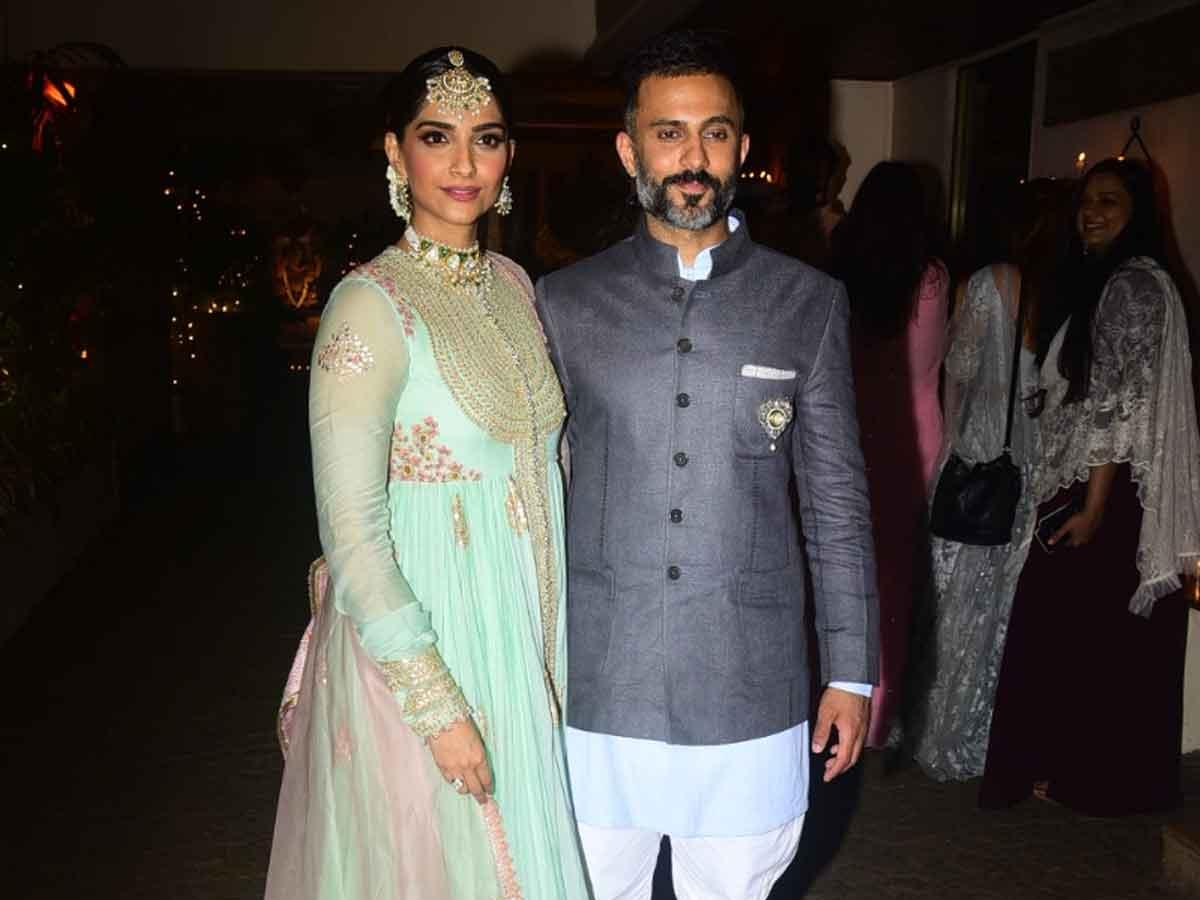 Sonam Kapoor was previously seen in the town on July 14, 2022, and the expectant mother’s stunning appearance left us in amazement. Sonam wore an eye-catching outfit in a bright yellow hue. Dewy makeup, winged eyeliner, and a wavy hairstyle were the finishing touches for her lookbook. It was impossible to ignore the attractive actress’s baby belly, which was at that point completely developed. Below is a look at it: 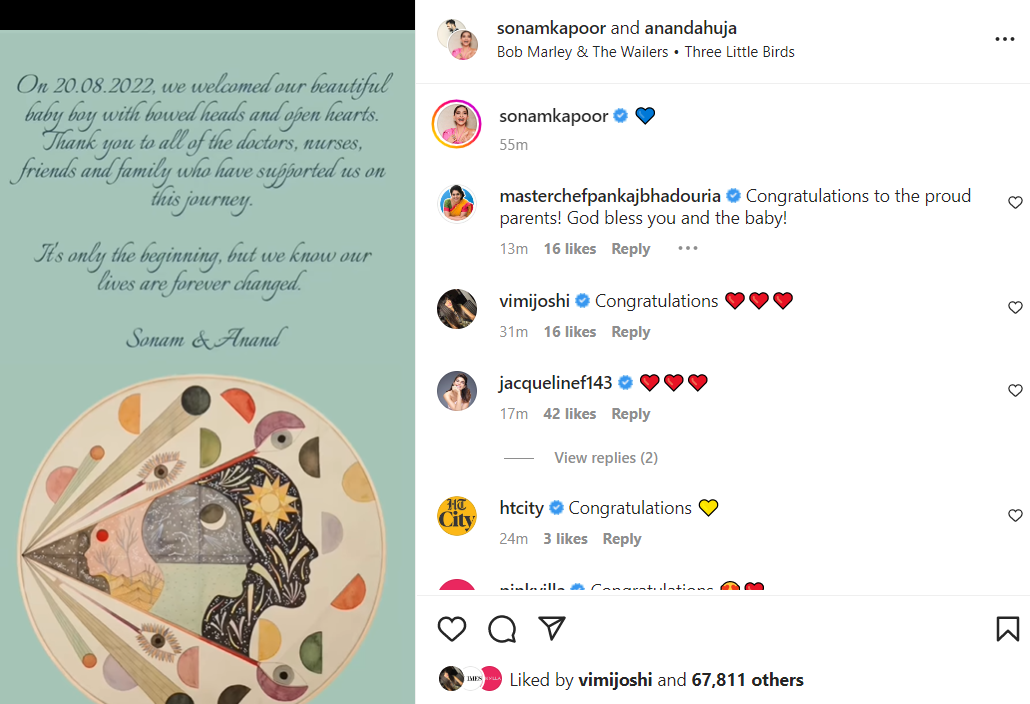 Sonam Kapoor and Anand Ahuja announced their “wonderful news” on August 20, 2022, via a beautiful postcard that also highlighted the newlyweds’ excitement at experiencing motherhood for the first time. The birth of a son for Sonam Kapoor and her husband, Anand Ahuja, was also announced by Neetu Kapoor via her Instagram stories. Through the photo message, the proud parents also expressed their gratitude to everyone. Neetu also congratulated the new nana-nani, Anil and Sunita Kapoor. View this: 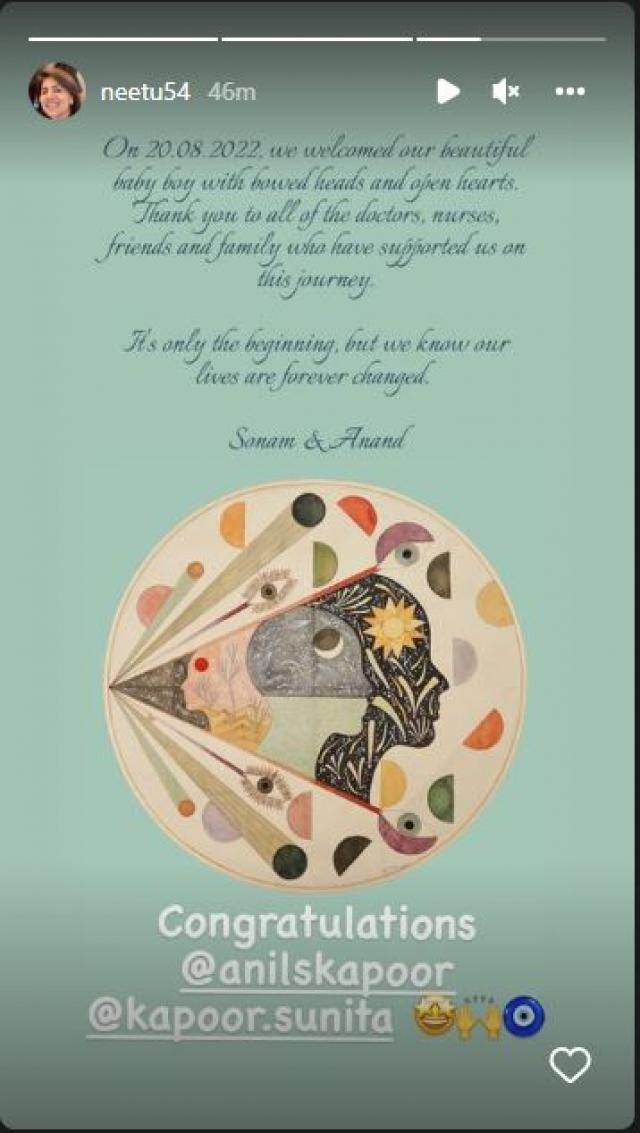 For the uninitiated, Anil and Sunita Kapoor were going to hold their daughter Sonam Kapoor’s baby shower at her maasi, Kavita Singh’s house in Bandstand. The baby shower was going to be a spectacular affair, and on June 13, 2022, the paparazzi had seen the opulent invites being brought out to be sent to the attendees outside the Kapoor residence. The elaborate invitations were elegant and included a variety of fine foods, refreshments, and desserts. Nevertheless, the event was postponed because of COVID-19 guidelines. View a sample of the invitations below:

Kangana Ranaut Accused Javed Akhtar For Extortion; Actress Seeks Transfer Of Defamation Case
Karishma Kapoor Planning To Get Married Again? Actress Answers To A Fan; Checkout Post Here
Amrita Rao Shares Rare Pictures From Her Pregnancy, Reveals She Didn’t See Any Scan Of Her Baby; Deets Inside!!!
Gauahar Khan’s Hubby, Zaid Darbar Shares His Last Goodbyes For His Late Father-In-Law; I Shall Take Care Of Your Daughter, Always
Bigg Boss 12 Winner Dipika Kakar To Give Price Money To Mother-In-Law, Plans To Buy This
Deepika Padukone Shares Her Relationship With In-Laws, For Ranveer’s Mom, She Is Her ‘Beti’
Here’s What You Need To Know When Planning Your Punta Mita Vacation..
Throwback Video: When Rani Called Now Enemy Aishwarya Rai Her Friend Forever
Forgot your Anniversary? Here’s How to Make up To Your Wife!