Esha Gupta Is Setting The Internet On Fire With Her Latest Topless Pictures From Her Jaipur Vacation; Checkout The Post

Esha Gupta, who had entered the entertainment industry with Jannat 2 alongside Emraan Hashmi has come a long way. The diva had soon made the headlines with her debut movie for her extremely hot physique and glamorous avatar. Although, the actress keeps posting some bold and hot pictures of herself on her Instagram handle. But, her latest post from her Jaipur vacation has taken the temperature a notch higher. 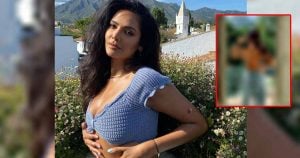 The ‘Naqaab’ actress took to her Instagram handle and posted few sunkissed topless pictures from her Jaipur vacation. In the pictures, Esha could be seen showing her bare back to the camera, with her hair open. The actress is donning blue baggy jeans and is standing in a balcony of her hotel room, which has direct sunlight. Esha posted the pictures along with a short and sweet caption, “”Love today Love tomorrow,” she wrote.

The post shared by Esha immediately went viral and the fans and followers of the diva couldn’t stop themselves from complimenting her. This is not the first time the actress has posted bold pictures, as she keeps sharing her bikini images with her fans and followers. In 2013, Esha Gupta was also listed as the FHM World’s Sexiest 100 Women on the 55th spot. 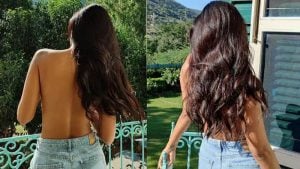 Earlier, Esha had even addressed the issue of celebrities being trolled online, “I think even after 2020 if people are busy being negative and trolling, it’s because they might have some serious issues. I sometimes feel bad that maybe they are frustrated and don’t have anyone to talk to, hence they troll others. Mental health awareness is very important,” she said.

Esha continued further and added, “If we keep debating we would always see the glass half empty side.”