Boney Kapoor got married to Mona Kapoor(Arjun’s mother) when she was only 19 in an arranged marriage setup. The couple not only grew together but also their love for each other brewed with the passing times. But when rumors of Boney dating Sridevi went afloat Mona Kapoor was devastated. The duo got divorced and Boney went on to marry Sridevi who was already pregnant with her first child Jahnvi Kapoor.

Arjun Kapoor went through anguish, trauma, and upheavals while growing up and he didn’t share a great bond with his half-sisters. But in 2018 after Sridevi’s mysterious death in Dubai Arjun Kapoor stood like a rock by his father Boney Kapoor and half-sisters Jahnvi Kapoor and Khushi Kapoor in their moment of grief. 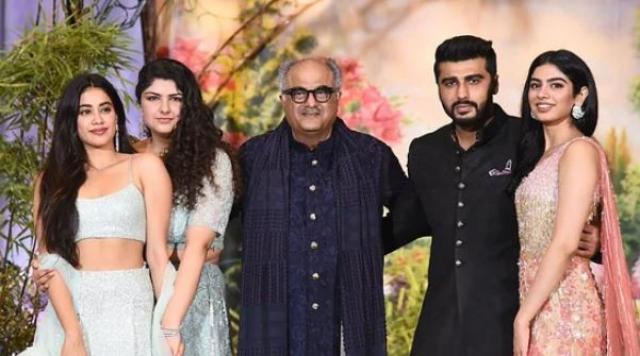 Now in a recent interview with Baazar Magazine, Arjun and Jahnvi opened up about the way their relationship has evolved, “There were silences. We would meet, but there was no communication worth quantifying,” he said. Janhvi added, “I have learnt so much from my family. We have the same father, we have the same blood.” Arjun teased her for her comment, “Glad you caught onto that.”

Jahnvi added, “And that is something no-one can take away from us. It’s not like we go to each other’s homes every day, or know every little detail about each other’s lives. But I felt an instant security with Arjun bhaiya and Anshula didi, a feeling of comfort. I wake up every day knowing that they always have my back, no matter what. And I can say this with more conviction about them than anyone else in my life.”

Earlier in an interview with Bollywood Bubble, Arjun had revealed that the two set of siblings are still trying to figure each other out and are not a unit yet. He was quoted as saying, ” If I say we are a perfect family, that will be incorrect. It’s not about different opinions, we still are different families who are trying to merge and coexist with each other. We all have amazing time when we are together but we are still not one unit. I don’t want to sell a fake lie that everything is perfect. It can’t be perfect, as we are still figuring each other out.”