Anushka Sharma is been traveling from Mumbai to Her Husband Virat Kohli, back and forth to strike a balance between work and family. The ‘Ae Dil Hai Mushkil’ actress has always given her family priority and loves to spend as much time with them as possible. Although, both Anushka and Virat have mutually decided that they would not share the pictures of their daughter on social, the actress keeps delighting her fans and followers with few glimpses of her every now and then. 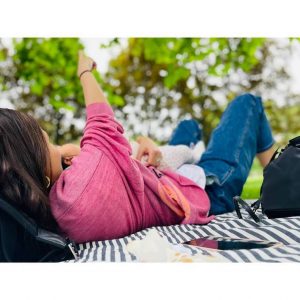 On Monday, the actress took to her social media handle and shared an adorable picture of husband Virat Kohli and daughter Vamika. We are assuming that the picture has been taken by the actress herself and she has clicked the snap from an angle from where her daughter’s face is not visible. Vamika is showing the back of head to camera with two cute pony tails. Virat Kohli, on the otherhand, could be seen smiling his heart out while playing with his daughter.

As soon as the actress posted the picture her and fans, followers and friends from the industry showered her post with love. Anushka Sharma posted the sweet picture along with the caption, “My Whole Heart In One Frame”.  Out of the millions of comments, the one comment which was the most relatable was Ranveer Singh’s reaction to the post. The actor just wrote, ‘Hayyee’ which is almost everyone’s feelings. Other celebrities like Rakul Preet and Masaba Gupta just dropped heart emojis on the picture. 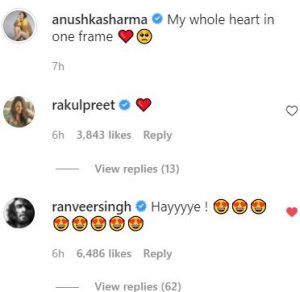 On the work front, Anushka has been shooting for lot of Ads and has not announced any upcoming movie. She had given birth to her daughter earlier this year.