Cricket and Entertainment world’s most favourite individuals and a couple Virat Kohli and Anushka Sharma are all set for New Year. the duo was recently spotted at the airport in their most comfy and cozy outfits. while Anushka opted for wide-leg jeans along with a high-neck top and a brown woolen cap, Virat Kohli wore a chic white sweatshirt, black track pants, and sports shoes. 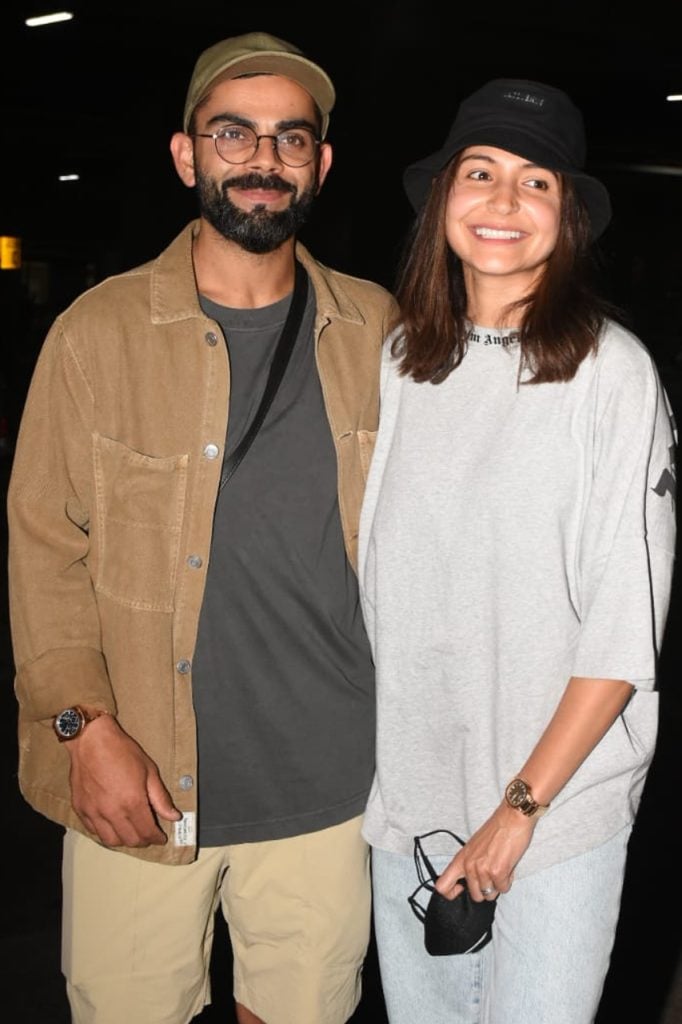 Both the stars reached the airport to leave for their new year vacation. The duo smiled and posed for the paparazzi and wished them a new year. as the celebrity photographers dropped the video of the pair on social media, their fans showered their love on them. “What a lovely couple they are,” wrote one user, “they are my most fav. always and forever,” wrote another one. “most humble and down to earth they are and successful also,” said another one. “i hope they will soon pose with their daughter as well,” commented another user.

Earlier, Virat Kohli and Anushka Sharma had visited the Kaichi Dham mandir in Nanital. where they seek blessings after the cricketer performed well in his tournament. Anushka Sharma too has been sharing photos and videos from her upcoming film ‘Chakda Express’ set. the actress recently wrapped up the shoot of the film and delighted her fans with BTS photos.

In the pictures, shared by the actress she could be seen wearing the Indian cricket team’s jersey. Anushka has also been roped as the new brand ambassador of ‘Puma’. the diva promoted and announced the collaboration in a unique way.

When Akshay Kumar Addressed Rumours Of Him Being In A Gay Relationship With Saif Ali Khan: Here’s What He Said!
Shakti Kapoor’s Son Opens About Drugs Case, Says ‘Someone Added It In His Drinks And Cigarettes’
Mouni Roy And Suraj Nambiar Celebrates First Wedding Anniversary, Actress Kisses Husband
Timothée Chalamet Grooves on ‘Mundian To Bach Ke’ Taking The Internet By Storm
Bigg Boss 12 Winner Dipika Kakar To Give Price Money To Mother-In-Law, Plans To Buy This
Deepika Padukone Shares Her Relationship With In-Laws, For Ranveer’s Mom, She Is Her ‘Beti’
Here’s What You Need To Know When Planning Your Punta Mita Vacation..
Throwback Video: When Rani Called Now Enemy Aishwarya Rai Her Friend Forever
Forgot your Anniversary? Here’s How to Make up To Your Wife!