Mumbai Drug Case is getting complicated day by day and is involving more and more stars as the days are passing. On Thursday, NCB summoned actress Ananya Panday for questioning the actress in the drug case. According to NCB, the team has come across the WhatsApp chats exchanged between Ananya Panday and Aryan Khan which points towards allegedly arranging drugs. Ananya Panday reached the NCB office yesterday with her father and was questioned for around 3 hours by the officials. The actress further would be asked to come on Friday at 11 am to record her statement. 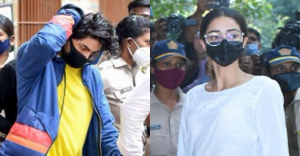 The actress has even asked her team to reschedule her shoots and endorsements for the coming days, as she would be summoned again by the NCB. Ananya has told her team that the questioning can stretch for 2-3 days so it’s better to reschedule the shoots. 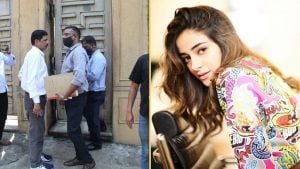 According to the reports, the actress was extremely nervous before entering the NCB office and she cried before the interrogation. Meanwhile, NCB is still conducting raids at Shah Rukh Khan’s place and the actor was allowed to meet his son yesterday. Shah Rukh Khan reached the Arthur Jail yesterday along with his bodyguards and greeted everyone with folded hands. Later, after entering the jail SRK could only talk to his son via intercom as there was glass fencing between them. 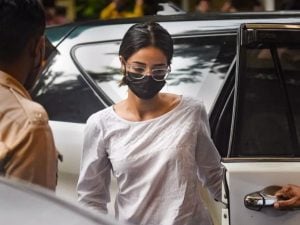 Aryan Khan was arrested on 2nd October after the NCB conducted a raid at the cruise ship, which was headed from Mumbai to Goa. The NCB raided the ship and busted the alleged rave party and arrested Aryan Khan along with seven others.