Actor Vidyut Jammwal broke the hearts of his female fans and announced his engagement with girlfriend Nandita Mahtani. But what caught everyone’s attention was the way the actor announced his engagement. Vidyut Jammwal didn’t take the traditional way of going down on his knees to propose marriage but instead did a rock climbing with his one and only.  The actor also posted a picture of the couple holding hands and standing in front of the Taj Mahal, the symbol of love. 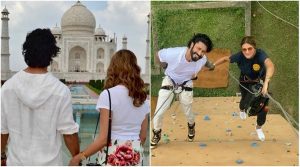 In another post, the actor shared a picture of the couple doing rock climbing and gave it the caption, “Did it the COMMANDO way” along with an emoticon of a ring and date 01/09/2021. Later, designer and fiancé Nandita Mahtani, also shared the same picture and captioned it, “Couldn’t keep him hanging any longer…said yes!!1-9-21”.

Last year, in a conversation with actor and fighter Michael Jai White, Vidyut had dropped hints of dating someone, “I’ve just started seeing this girl. By the way, you (Michael) are the first person I am saying it to. I have just started seeing somebody. I really like this girl and before you get to know through other sources, I think Michael has inspired me to say it,” he had said.

Nandita Mahtani is a fashion designer in Mumbai who has styled many celebrities including Virat Kohli and Ananya Panday.