Parineeti Chopra is one of the actresses who has come a long in the entertainment industry. The actress is one of the most educated people in Bollywood and was working with Yash Raj’s marketing team before entering films. Everybody knows that Pareeniti is the cousin sister of Bollywood actress Priyanka Chopra and both share a very close bond with each other. 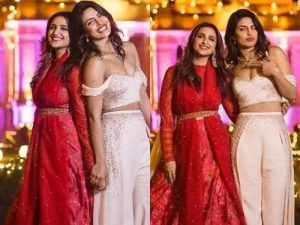 On Parineeti’s birthday, actress Priyanka Chopra took to her Instagram handle and shared a throwback picture with her. The global celebrity and desi girl took two pictures of her with Pareeniti and shared them on the social media platform. The first picture is from Priyanka Chopra’s teenage years whereas Parineeti is still very small as compared to her elder sister.

The next picture is from Priyanka Chopra’s wedding album, where the two actresses are decked up in glamorous outfits. In which, Parineeti has chosen a bright red gown whereas Priyanka could be seen wearing a beige off-shoulder dress. Priyanka shared the pictures on her Instagram handle and wrote, “Happy Birthday Tisha sending so much love” (Tisa is Parineeti’s nickname).

The two sisters’ love and sweet banter are quite evident on social media platforms. Recently, when Priyanka Chopra had shared her bikini picture from her vacation with husband Nick Jonas, Parineeti was the first one to comment to lovingly pull their leg. “Jeej! Mimi didi! What is going on here the family is on Instagram ***Tries to hit like button with eyes closed,” she had written. 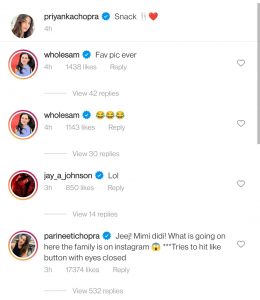 Parineeti’s comment quickly grabbed the attention of the netizens and definitely left everyone laughing out loud. On the work front, Parineeti’s 3 films namely Saina, The Girl On The Train, and Sandeep Aur Pinky Faraar have been released on the OTT platforms and her performance has been praised in all of them.