Popular tv actress Tejasswi Prakash has bought a new Audi 7 for her home. The actress was recently seen making her way to a showroom and buying a car with her boyfriend Karan Kundra. Tejasswi and Karan rose to fame after the duo entered the Bigg boss house and got close to eachother. The couple entertained the audience from inside the house and now is often seen together at different events. 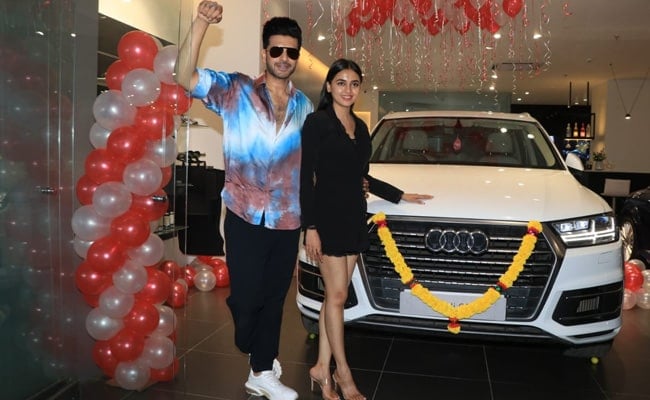 In the videos and pictures shared by the paparazzi, the actress could be seen wearing a black dress. Tejasswi was looking stunning in her formal black dress and dewy makeup look. The diva broke the coconut in front of her car for the ‘Nariyal phod’ ceremony and sprinkled some on her Audi 7. The ceremony is done in the Hindu religion before starting any project or buying new things.

In the video, Tejasswi is trying hard to break the coconut but fails in her first attempt. The actress then tries again when her coconut slips from her hand and goes away. ‘It finally broke,’ Tejasswi could be heard saying in the video. Karan who is accompanying the actress is seen holding the coconut in his hand and helping his girlfriend with all the formalities.

Earlier, Karan and Tejasswi had responded to their marriage rumors. The actor had mentioned that he would follow the advice given by Rubina Dilak in the house. the actress had told him to give eachother time before tying the knot.

On the work front, Tejasswi Prakash is gaining popularity for her show Naagin and has been garnering a lot of attention for the same.