Bollywood superstar Shah Rukh Khan visited Mumbai’s Arthur Jail today to meet his son Aryan Khan. The star kid was arrested from a cruise where he was allegedly invited to a drug party. After the NCB raided the ship on 2nd October, the team busted the alleged rave party and took Aryan Khan along with seven others under their custody. After producing the accused in front of the court, their bail has been rejected twice. On Thursday, Shah Rukh Khan met his son for the first time after he was arrested in the Mumbai drug case on 2nd October. Earlier, the superstar had sent a money order of Rs 4,500 to his son for buying food and water from the Jail canteen. 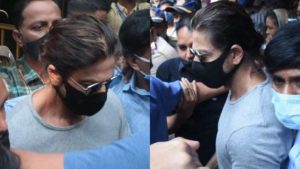 Shah Rukh Khan who was busy shooting for his upcoming film Pathan before his son got arrested reached the Arthur Jail. According to reports, SRK spent approximately 20 minutes with his son in Jail, this comes after the Maharashtra government eased down the restrictions on Jail visitors amid covid-19. Aryan Kha’s bail plea has been rejected twice by the Mumbai session court and now his lawyers are preparing to approach Bombay High Court for the same. The star kid’s judicial custody will end today. 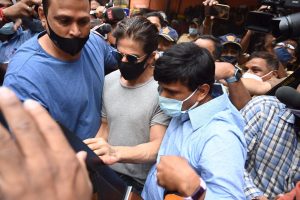 Aryan Khan had earlier talked to his parents Shah Rukh Khan and Gauri Khan via video call. As per the reports, the star couple is having a tough time while dealing with the whole situation after their son got arrested in the drug case. Shah Rukh Khan has canceled all his work and shooting schedules and is just focusing on his son, while Gauri on the other hand, has been crying inconsolably ever since Aryan was sent to Arthur Road Jail.

On Wednesday, a special court had denied bail of Aryan Khan along with others over the alleged drug-associated Whatsapp chat. NCB argued that they have found the WhatsApp chats in Aryan Khan’s phone that prove that he is actively involved in “illicit drug activities”.