Bollywood is filled with glitz and glamour and dating rumors about a filmstar seeing his or her co star is not new. One such most talked about couple was Salman Khan and Katrina Kaif who were once the talk of the town. The actors were dating each other but none of them really come out in public and accepted anything. But did you know that once Salman Khan had proposed marriage to Katrina Kaif at a party?

Yes, you read that right! According to a report by rediff.com it was during Katrina’s 24th Birthday when the actor was taken aback by the proposal. Reportedly the couple had fallen in love during the shoot of Maine Pyar Kyun Kiya, but the actress wasn’t ready for the marriage. 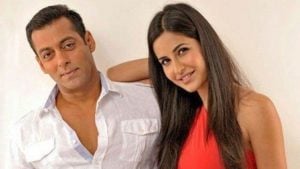 The birthday bash was organized by Salman himself which had the biggest stars as guests from the industry. The party was attended by Shah Rukh Khan, Aamir Khan, Ranbir Kapoor, and many other celebrities from Bollywood. Salman had even invited Katrina’s mother and sister to the birthday party of the actress.

Later in the evening, the Dj played the title track from Salman Khan’s movie Mujhse Shaadi Karogi as the star allegedly went down on his knees to propose Katrina. As per the guest present at the party, Katrina did not know how to react to the whole situation.

However, whatever happened in the past, the two are still cordial with eachother and are working together for Tiger 3. Salman and Katrina often drop pictures from Russia and Austria where they are currently shooting for their upcoming project.

Bigg Boss 15: Shamita Shetty’s Mother Sunanda Shetty Blasts Karan Kundrra For Calling Her Daughter “Aunty”, Says, “From Which Angle Does Shamita Look Like Aunty?”
Nargis Fakhri Regrets Keeping Her 5 Year Relationship With Uday Chopra A Secret; Check Out The Details Inside
From Virat Kohli To Priyanka Chopra, Here’s How Much Each Actor Charges For One Instagram Post
‘She’s So Uncomfortable’ Disha Patani Paired Swim Suit With Pants, Kept Holding It From Falling; Watch