Ever since the Bollywood’s most talked-about couple Alia Bhatt and Ranbir Kapoor have come out in open and confessed their love, both have been inseparable. It all started when the rumors about the couple dating eachother surfaced online while filming for their upcoming movie ‘Brahmastra’. In an interview with film journalist Rajiv Masand, Ranbir Kapoor had even addressed Alia Bhatt as his girlfriend and mentioned that he would have got married if pandemic hadn’t hit the world. 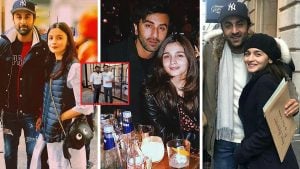 Although, Ranbir is not on social media platforms his girlfriend Alia keeps drooping adorable love posts every now and then. Recently, the diva had also wished his sister on her birthday and posted a miss you note. “Happy birthday to our beautiful 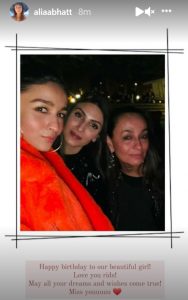 girl! Love you rids! May all your dreams and wishes come true! Miss youuuuuu”.

In the picture, Alia Bhatt could be seen posing with Ranbir Kapoor’s sister and her mother Soni Razdhan. The picture seems to be from their past outings wherein the actress looked drop-dead gorgeous in red attire while Riddhima and Soni Razdhan could be seen donning a black outfit. All the three are smiling for the camera as Alia Bhatt is taking the selfie.

On the work front, Alia Bhatt is busy shooting for a lot of interesting projects. She has recently finished shooting for Sanjay Leela Bhansali’s Gangubai Kathiawadi. The diva will now be seen in RRR with Ram Charan and Jr NTR. Apart from it, Alia Bhatt has many films in the pipeline such as Darlings with Ranveer Singh and Jee Le Zaraa along with Katrina Kaif and Priyanka Chopra Jonas.