For the Brahmastra couple, it was a particularly memorable Christmas because it was not only their first as a married couple, but also their first as Raha’s parents. Alia surprised her fans with some stunning photos of her and Ranbir with the entire family early this morning, and fans couldn’t stop fawning over them. Yesterday, we were treated to some lovely images of the Kapoor family.

Alia Bhatt posted several pictures from her wonderful Christmas celebration to her Instagram account. Ranbir Kapoor can be seen hugging her and kissing her cheeks in the first picture. This is a truly picture-perfect moment. Ranbir looks dapper in a white shirt, blue denim, and beanie while Alia is dressed in a red oversized dress. Alia poses with her sister Shaheen Bhatt in the following photo. Then a photo of all the Bhatt and Kapoor women taking a selfie appears. Finally, here is a photo from the yearly Kapoor Christmas party. 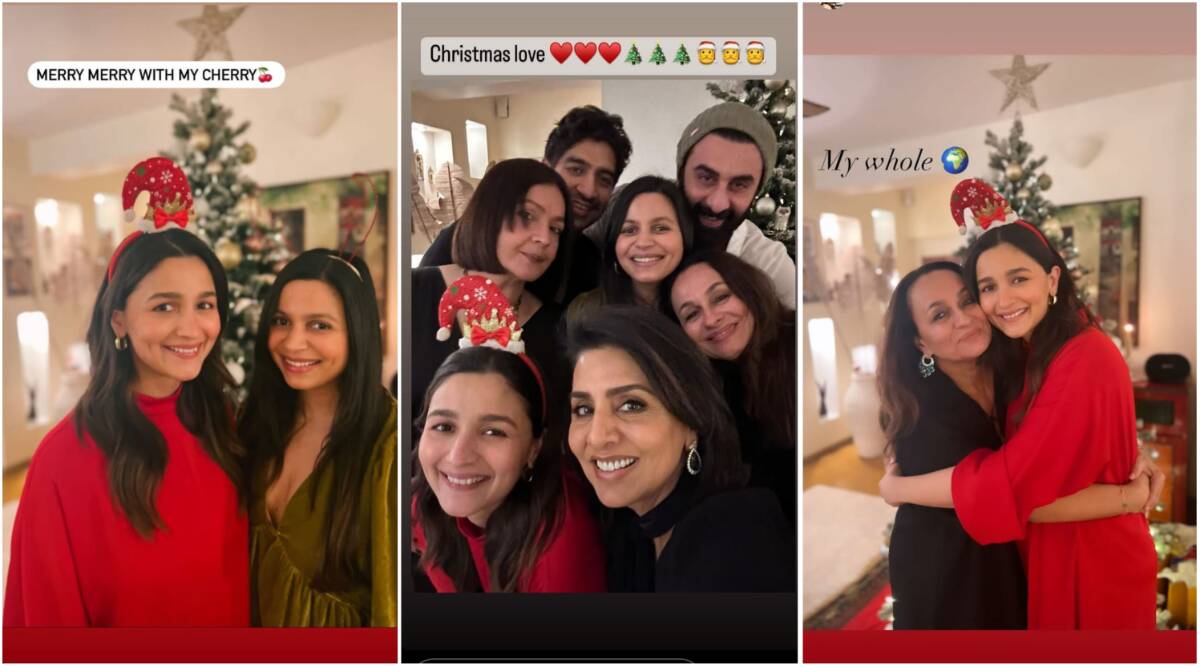 In a photo she posted, Alia Bhatt can be seen mastering the inversion. She is shown practising aerial yoga inversions while sporting a black athletic outfit and folded arms. Alia stated in her statement that she has been “gradually re-building” her connection to her core and that 1.5 months after giving birth, she was able to attempt the inversion today with the help of her trainer Anshuka Parwani. She advised new mothers against overexerting themselves and said that because everybody is unique, they should take their time. 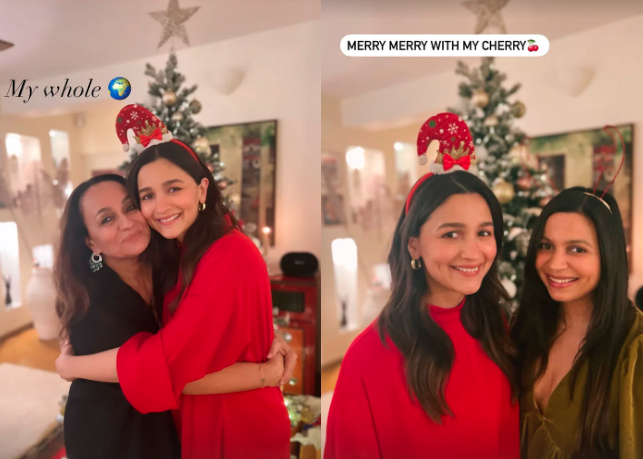 “To my fellow mamas, listening to your body post-delivery is key. Do NOT do anything your gut tells you not to. For the first week or two during my workouts, all I did was breathe… walk… find my stability and balance again (& I still have a long way to go) Take your time – appreciate what your body has done,” she wrote.

On the professional front,Rocky Aur Rani Ki Prem Kahani, which also stars Ranveer Singh, Shabana Azmi, Dharmendra, and Jaya Bachchan, will include Alia Bhatt as the lead. The day of release is set for April 28, 2023. With Heart Of Stone, Alia will also make her Hollywood debut.

On the work front, Next, actor Ranbir Kapoor and Rashmika Mandanna will be seen in the movie Animal. Later, Ranbir will be seen with Shraddha Kapoor.

Mouni Roy Sparks Pre-Bridal Glow As Spotted At The Airport Leaving For Goa For Her Wedding; Take A Look!!!
Inside Picture’s From Neha Kakkar’s Birthday Bash, Here’s How Husband Rohanpreet Singh Celebrated Her Birthday, See Pics
From Failed Marriage To Finding Love Again, Here’s Everything About Darlings Actress Shefali Shah’s Love Life
Tiger Shroff tries ice skating for the first time as he shoots for Ganpath and says, “Not bad for my first time.” Look at the video.
Bigg Boss 12 Winner Dipika Kakar To Give Price Money To Mother-In-Law, Plans To Buy This
Deepika Padukone Shares Her Relationship With In-Laws, For Ranveer’s Mom, She Is Her ‘Beti’
Here’s What You Need To Know When Planning Your Punta Mita Vacation..
Throwback Video: When Rani Called Now Enemy Aishwarya Rai Her Friend Forever
Forgot your Anniversary? Here’s How to Make up To Your Wife!