“Pandya Store” Fame Akshay Kharodia’s Marriage With Divya Punetha In Trouble Just After One Month?, Actor Shares A Cryptic Post About Being Heartbroken

Pandya store actor Akshay Kharodia tied the knot with his longtime girlfriend Divya Punetha on 19th June. It’s not even a month Akshay Kharodia’s heartbroken post has lead to speculations of trouble in their marriage. Taking to his Instagram handle he shared a cryptic post that read “Ek mohabbat thi” adding a heartbroken and teary-eyed emoticon.

The actor’s cryptic post has made fans wonder if his marriage with Divya Punetha has hit a rough patch. The actor has also stopped sharing pictures with his wife Divya and it’s adding fuel to the existing rumours. 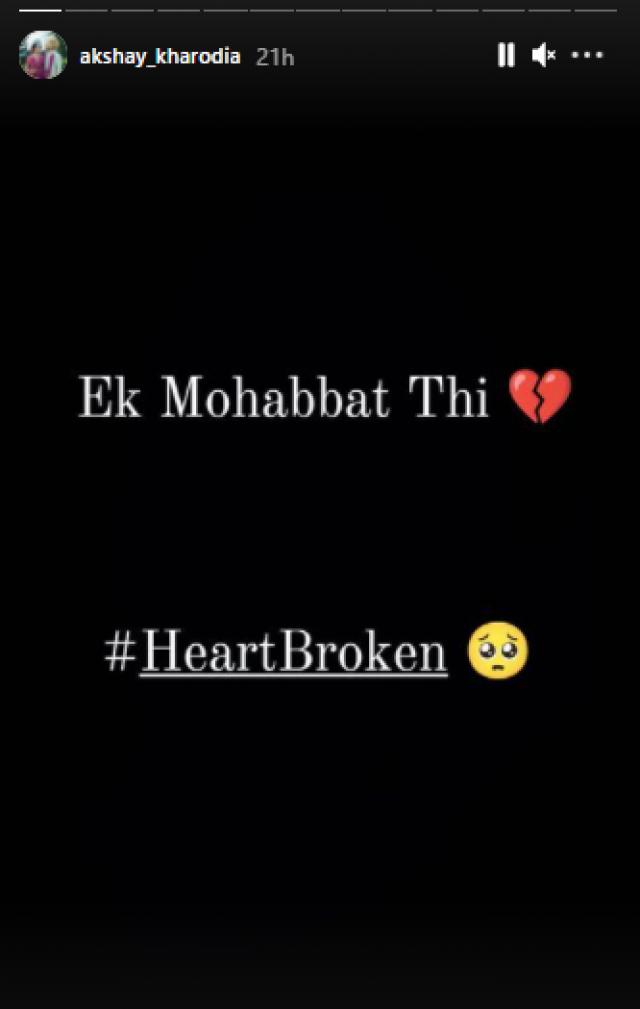 For those who are unaware, Akshay Kharodia and Divya Punetha had tied the knot in an intimate ceremony. The pre-wedding festivities had taken place in actor’s hometown in Kota while the wedding had taken place in Divya’s hometown in Dehradun. To share the news of his wedding with his fans and followers Akshay had taken to his IG handle to share some pictures from his wedding and captioned it as, “Together and forever”. Later he had shared a series of pictures and captioned it as, “Thank you, everyone, for your love & blessing, both of us are so grateful to everyone for making our special day even more special.” Take a look:

In an interview with ETimes, Akshay was all praises for his wife and shared that she has been with him through thick and thin. He was quoted as saying, “She has been with me through thick and thin when I was nothing. Also, our parents were not very convinced about the marriage as she is a Brahmin and I am a Rajput. So they had their reservations.”

He had further shared, “There were a lot of conflicts. I was not settled and Divya’s family, like every parent, wanted someone with a secure job. They would tell her that you are a doctor, he is an actor and what are you. But we kept faith and love won in our case. She supported me in my tough times.”

Although, Akshay has not made any official statement about the matter yet.