Malaika Arora Reveals She Wishes To Have A Daughter, “I Have Such Beautiful Shoes But No One To Wear Them”

Malaika Arora in a recent episode of “Super Dancer” was awestruck after seeing the performance of little wonder Florina Gogoi. Malaika revealed that seeing her perform reminded her that she always wanted a daughter.

According to Bollywood Life, Malaika had said, “Main tumhe ghar leke jaun kya (Can I take you home)? I have a son at home… From a long time, I have been saying, ‘kaash meri ek beti bhi hoti. I have such beautiful shoes and clothes, and no one is there to wear them!”

Malaika has a teenage son named Arhaan from her marriage with her ex-husband Arbaaz Khan. The two break off their marriage due to irreconcilable differences and now the beautiful actress is dating Bollywood hunk, Arjun Kapoor.

Talking about her son Arhaan’s reaction on their divorce Malaika had stated, “I would much rather see my child in a happy environment than be subjected to an environment that is completely disruptive. With time, my child is far more accepting. He can see that we both as individuals are far more happy than we were in our marriage,” she had revealed on Kareena Kapoor’s chat show, adding, “He did actually turn around one day and he did say that to me, ‘Mom, it’s good to see you happy and smiling.’” 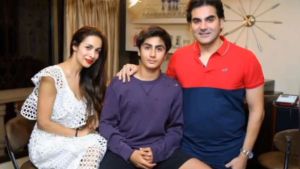