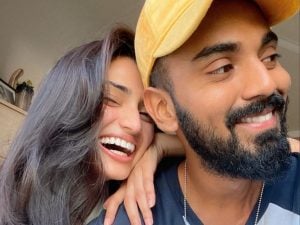 Athiya made a surprise appearance to KL Rahul’s Instagram stories and wrote, “You should defs FaceTime me.” To this, KL Rahul answered with a picture, in which he could be seen posing with another person in a costume of a cat and both are frowning at the camera, “Our face when you don’t pick up @athiyashett,” KL Rahul wrote in the caption. 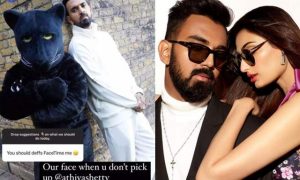 Athiya Shetty and KL Rahul are rumored to be dating each other for a long time. the duo often comments on each other’s pictures and also shares their adorable images on their respective social media platforms. However, neither of them have come out in open to confess their love for each other but Athiya was seen travelling with Rahul to England for the World Test Championship.

According to a Hindustan Times source, KL Rahul had listed Athiya Shetty as his partner for the tour. “The couple left India together for England for the World Test Championship last month. Before leaving, the logistics department had asked all players for the names of people travelling with each of them. The players were supposed to give the names of whether they would be travelling with wives or partners, for which KL Rahul listed Athiya Shetty as his partner. She travelled in the same bubble and stayed in Southampton with the team,” said the source.