Gauahar Khan On Her Pregnancy News With Zaid Darbar, “I’ve Just Lost My Dad, Have Some Sensitivity”

Gauahar Khan, who lost her father a few days ago, rubbishes the reports of her pregnancy. After her father’s death, the reports of Gauahar’s pregnancy started surfacing on the internet. Based on the cryptic post made by Gauahar Khan’s husband Zaid Darbar, Asianetnews Hindi reported that Gauahar Khan is pregnant after 3 months of her marriage. Now, the actress has reacted to the same and slammed the portal for publishing false news.

Gauahar Khan re-shared the news article of her pregnancy on her twitter handle and wrote that she is not pregnant. She wrote, “Tumhara dimaag kharaab hai ! Aur facts bhi . 12 saal chote waali galat news hui purani , so get ur facts right b4 typing ! I’ve just lost my dad so have some sensitivity towards ur baseless reports. I am not pregnant, thank you very much !” 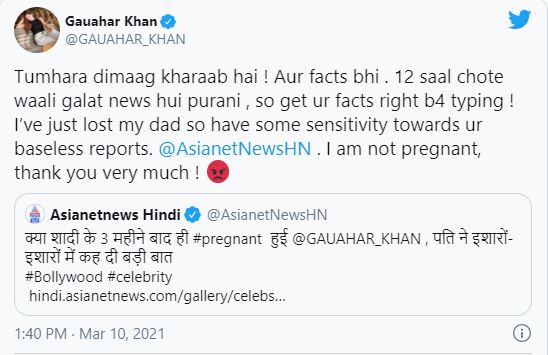 Earlier talking about the age gap between her and Zaid, Gauahar had told Etimes, “Let me clear this, the age difference that has come out is wrong. 12 years is wrong and it is very easy for people to make it news. But it is wrong. Yes, he is a few years younger to me but 12 is not the number. He is way more mature than I am and he has brought the sense of balance in my life.”