Coming from a non-filmy background to now featuring in every blockbuster movie Deepika Padukone and Ranveer Singh is undoubtedly the power couple of Bollywood. Recently, the love birds were clicked outside the Hinduja hospital in Mumbai. The Bajirao Mastani stars were snapped by the media as they were seen exiting the hospital.

The pictures of both Deepika and Ranveer seated inside their car outside the hospital immediately went viral, and fans started speculating Deepika’s pregnancy. Ranveer Singh slayed in his dapper avatar, as he opted for a white T-shirt along with a printed black cap, red face mask, and his signature sunglasses. Whereas Deepika Padukone kept it simple and chose a black top, white face mask, and aviators. 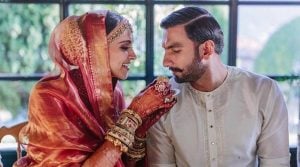 However, this is not the first time when the fans are expecting good news from the couple. In the year 2019, Deepika’s Met Gala pictures had gone viral and the couple made the headlines that the actress is expecting her first child. Although, later the actress gave an interview to Express.co.uk and slammed all the rumors, “It will happen when it has to happen.” “Motherhood trumps being married. That’s what I hear from people who have had children. Of course, it will happen at some point but no, I think it is unfair to put women through that, to put a couple through that. I guess the day we stop asking the questions is when we will bring about change,” she said.

Read More: Deepika Padukone Reveals That She And Ranveer Singh Didn’t Opt For A Live-In Relationship Before Marriage

Meanwhile, the reason behind the couple’s visit to the hospital is still unknown and has left a section of their fans worried. The pictures of the couple shared by Viral Bhayani on Instagram were bombarded with concerned comments by the fans and followers.  “I hope everything is fine,” wrote one user. “The covid situation is at peak right now I hope they are safe,” commented another fan.

Deepika and Ranveer got hitched in 2018 after starring in super hit movies like Bajirao Mastani, Ram Leela, and Finding Fanny. The couple is all set for the release of their forthcoming film 83 which is a sports biopic. Ranveer is going to ace the role of legend cricketer Kapil Dev while Deepika is going to play the character of Kapil Dev’s wife Romi Bhatia.