Congratulations are in order for Charu Asopa and Rajeev Sen as the couple had recently announced their first pregnancy. Almost two years after tying the knot with Sushmita Sen’s brother Rajeev Sen, Tv actress Charu Asopa is expecting her first child with him.  She had taken to her Instagram to share this happy news with her fans. Sharing a beautiful picture of her flaunting the baby bump she had captioned it as, “Grateful Thankful Blessed”. Take a look:

Congratulatory messages started pouring in as soon as Charu announced her pregnancy. Her friends and co-stars from the industry congratulated the actress on her pregnancy. Even the elated father-to-be Rajeev also took to his Instagram to share this happy news and captioned it as, “Happiness is on the way”. Have a look:

In a conversation with a leading daily Charu had revealed, “Sushmita didi is so excited. She keeps sending me voice notes and the messages she sends are amazing to hear. She is very happy and is just waiting for the baby.” Adding that she was taken aback after seeing a positive result when she did her pregnancy test at home and shared, “I was shivering when I saw those two pink lines. For some time I was completely clueless about what to do and I was sitting inside for 15-20 minutes in the bathroom. Then I went out and informed Rajeev and even he was clueless and had mixed feelings. And it was quite late at night when we discovered it, so we were confused if we should inform the family at night or in the morning. But ultimately we couldn’t control and informed the family on video calls. Everyone was shocked, surprised, excited, happy, I wish I could have recorded the reactions.” 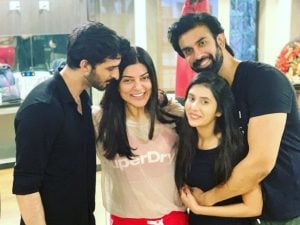 Talking about her first sonography experience, “The moment I got goosebumps was when I did my first sonography in 6th week. I still get goosebumps when I recall hearing my baby’s heartbeat for the first time. Oh my god, it was magical, unbelievable. That’s the first time I realised that I have another human inside me. It’s a very different feeling and can’t be described in words.”

We wish Charu Asopa an easy and healthy pregnancy.