Bigg Boss OTT: KRK Claims Shamita Shetty Is 48, Furious Netizens Remind Him “Even Her Older Sister Shilpa Shetty Is Younger Than That”

Shamita Shetty’s participation in  Bigg Boss OTT came as a surprise to her fans weeks after her brother-in-law Raj Kundra’s arrest. And she is one of the contestants who is making the most buzz this season. Recently Akshara Singh and Urfi Javed were seen discussing her age while Akshara called her “maasi” (aunt) and claimed that she was as old as her mother.

Reacting to the same KRK who was a contestant on Bigg Boss 3 with Shamita took to Twitter and wrote, “#BiggBoss house contestants are correct about #ShamitaShetty! I did #BiggBoss3 with her in 2009, when she was 35 years old. So now she is 48 years old.” 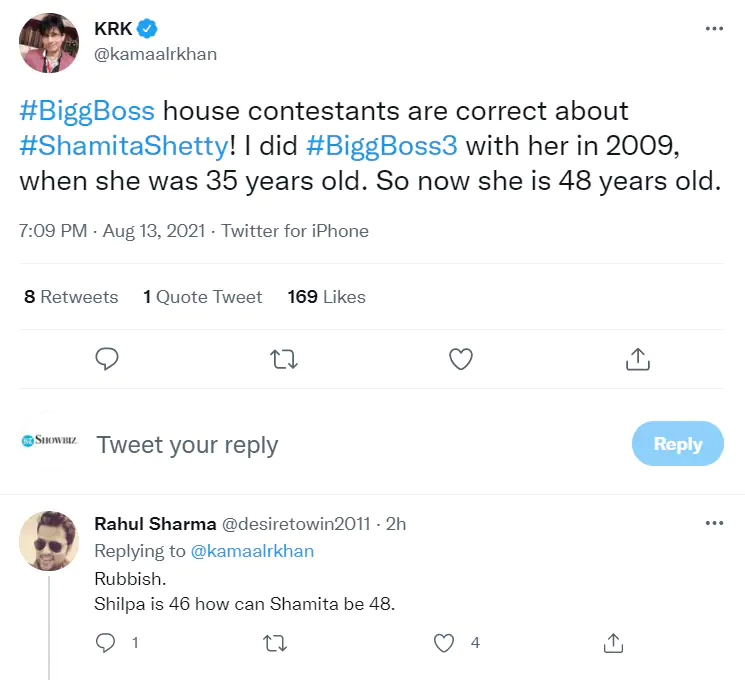 However, Twitteratis came to her rescue and reminded him that even her older sister Shilpa Shetty was younger than 48. One wrote, “Rubbish. Shilpa is 46 how can Shamita be 48, another wrote, “Google it man #ShamitaShetty,” another commented. While Shilpa is 46, Shamita is 42 years old.

Shamita had earlier participated in Bigg Boss season 3 but she had to quit the show midway to attend Raj Kundra and Shilpa Shetty’s wedding. At the premiere of Bigg Boss OTT, Shamita had admitted being conflicted about continuing her participation in the show. Shamita as she entered the house said, “I am so thankful that I am back on Bigg Boss, after 10 years. I have changed a lot since then”.

“Honestly, the offer came long back, and I had already said yes. However, a lot happened recently and I thought I will let go the opportunity. But since I had committed, toh ek baar maine commitment kardi to main kisi aur ki nahi sunti, she added.”