Actor and producer Anushka Sharma recently took to her Instagram handle to share a picture from her lunch date with her husband and cricketer Virat Kohli.  In the Image, she could be seen smiling and being in the calmest state with her eyes closed and hands supporting her face. 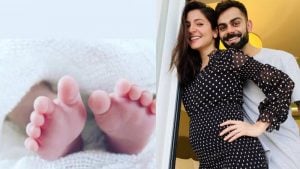 Anushka Sharma can also be seen donning an off-white cardigan and earrings. She has even gone for a short hair look lately which is absolutely looking stunning on her. Anushka is one such personality who is known for her confidence and she loves being herself. This is quite evident in her pictures as well where she has opted for a no filter and no-makeup look. She is just sitting at a table and smiling while her husband is clicking the picture. The diva didn’t caption the post but just added an emoji of a flower.

Recently the official account of London’s Tendril Restaurant too had shared an image of the couple on their Instagram handle. The pic immediately went viral where both starts could be seen posing with the chef Rishim Sachdeva.

Anushka is currently accompanying her husband Virat Kohli along with her daughter Vamika in Uk. On the work front, Anushka’s upcoming production project is Qala which would also be the debut of late legendary actor Irrfan Khan’s son Babil Khan.