Aditya Dhar Gets Excited Knowing That He Isn’t The Only One Getting Schooled By Wife, Yami Gautam; Check Out!

Recently, the filmmaker Aditya Dhar shared the trailer of his wife, Yami Gautam’s upcoming movie, ‘Dasvi’, co-starring Abhishekh Bachchan. Alongside it, he wrote a caption sharing secrets about his wife. On June 4, 2021, Bollywood diva Yami Gautam got married to filmmaker, Aditya Dhar. The couple had met each other for the first time on the sets of their film, URI: The Surgical Strike. Slowly, they had become friends, and love had brewed between them. Eventually, they tied the knot with each other in an intimate wedding ceremony. 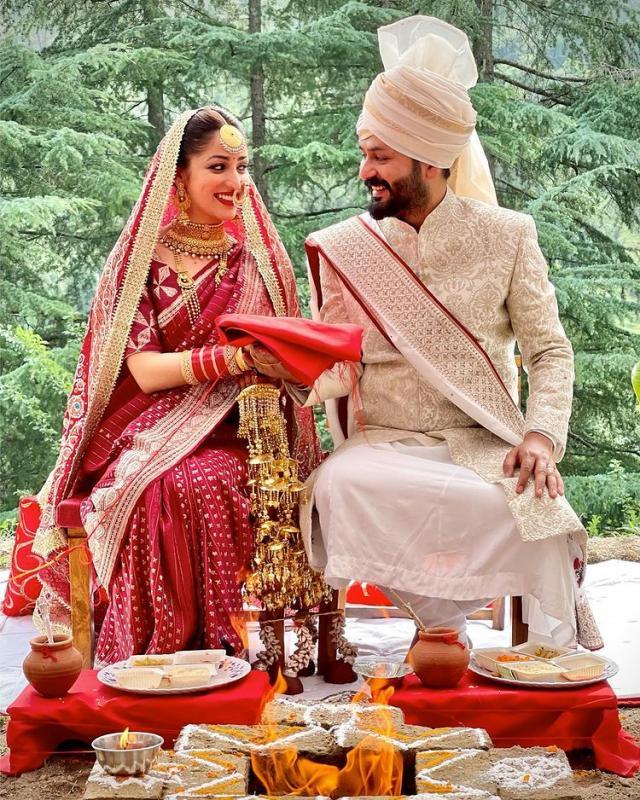 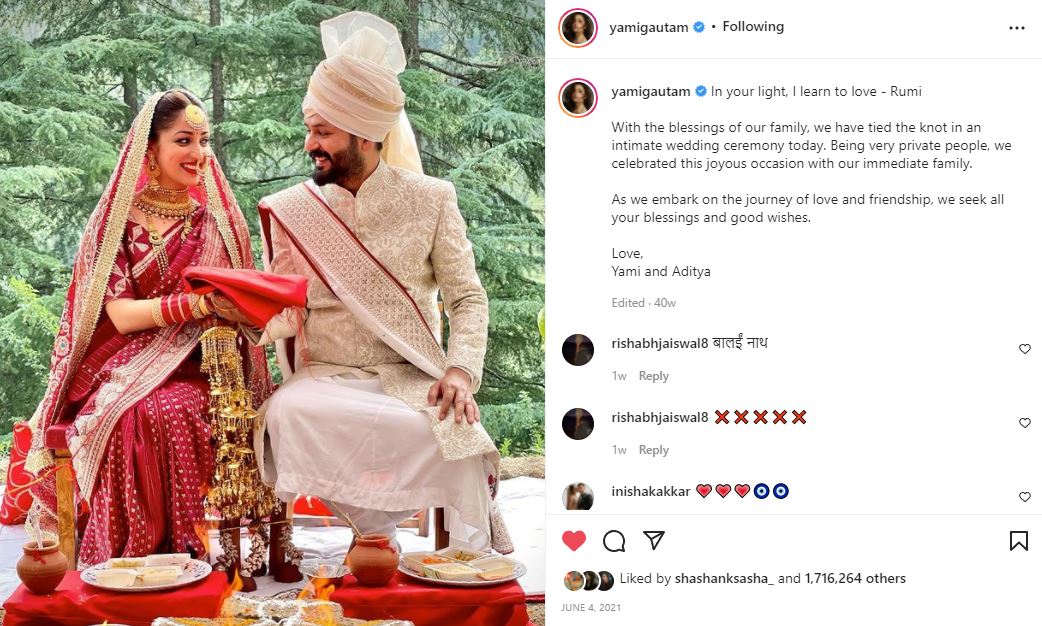 “In your light, I learn to love – Rumi. With the blessings of our family, we have tied the knot in an intimate wedding ceremony today. Being very private people, we celebrated this joyous occasion with our immediate family. As we embark on the journey of love and friendship, we seek all your blessings and good wishes. Love, Yami and Aditya.”

After the wedding, Yami Gautam had started her work again. She has never stopped and given one after the other outstanding performances in her last released films like A Thursday, Bhoot Police, and many others. On March 23, 2022, Yami Gautam’s next upcoming movie, Dasvi’s trailer was launched. Ever since she has been gathering praises and love from her fans and friends. Although, it is her husband, Aditya Dhar’s response that has grabbed our attention. 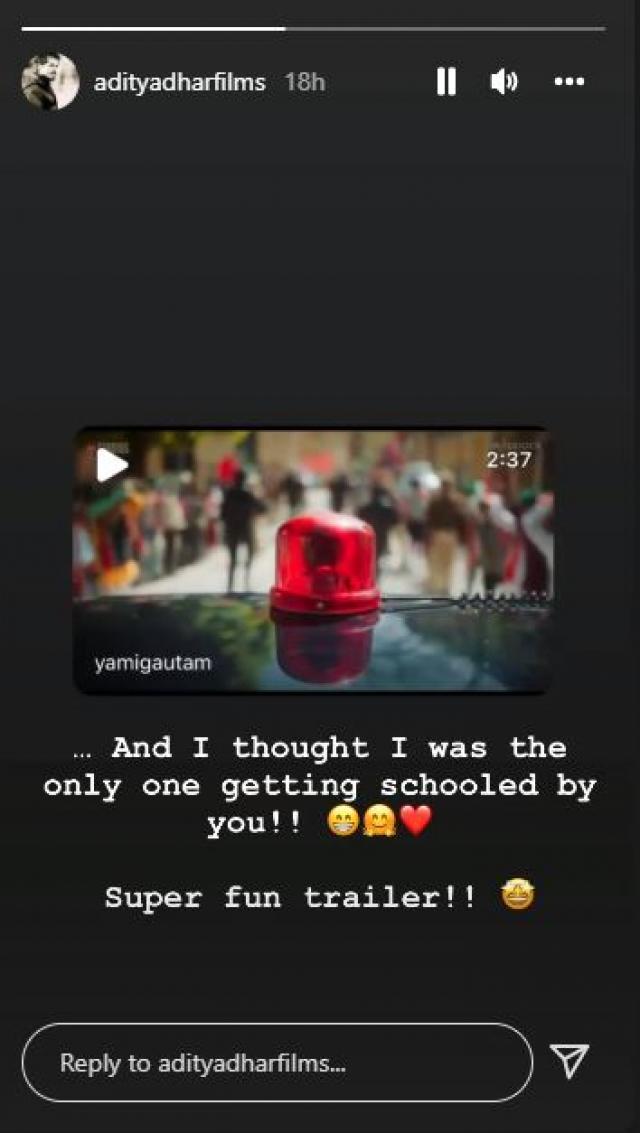 Aditya Dhar shared a post on his Instagram stories and again shared the trailer shared by his wife, and shared his reaction to the trailer. Along with that, he made a joyful disclosure about Yami Gautam. He cleared his thoughts and mentioned that he is not the only one who gets schooled by his wife. Aditya Dhar’s funny caption can be read as: “…And I thought I was the only one getting schooled by you!! Super fun trailer!!” 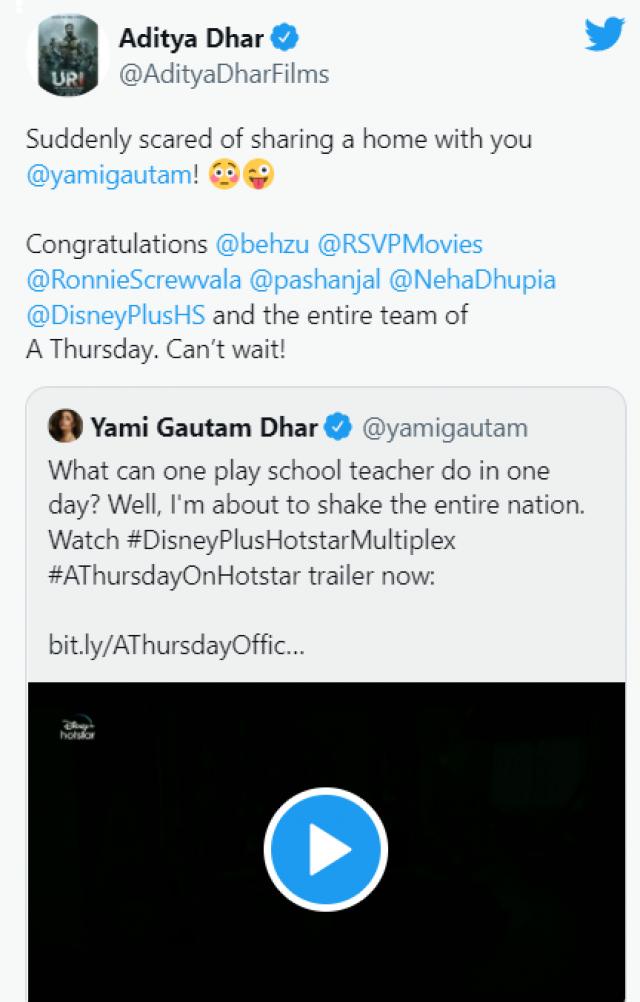 This is not the first time that Aditya made a funny post. Along with this, he is praising his wife and actress Yami Gautam’s performances. Early, when Yami Gautam’s then-upcoming movie, A Thursday’s trailer was launched, Aditya had shared a post on his Twitter handle and had posted the trailer with a funny comment on his social media handle. 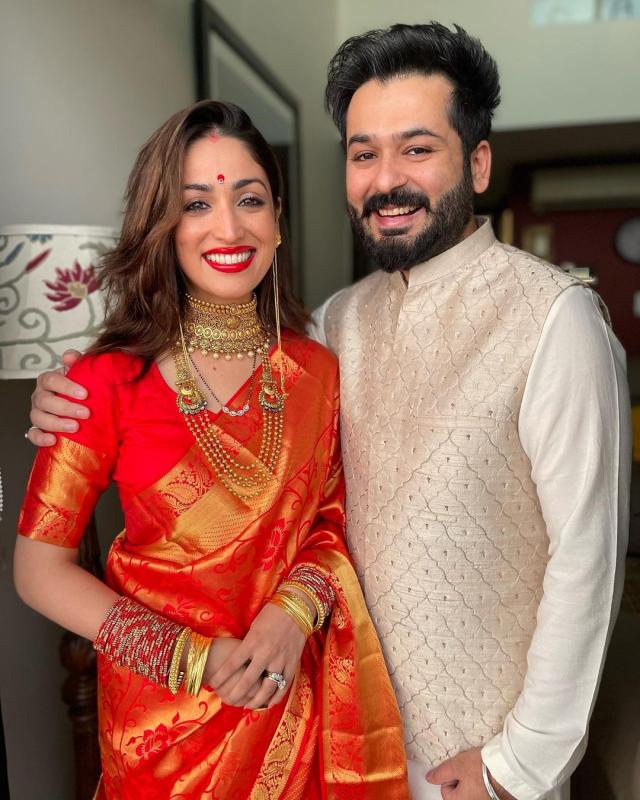 He had written: “Suddenly scared of sharing a home with you @yamigautam! Congratulations and the entire team of A Thursday. Can’t wait!”