It’s inevitable to separate Bollywood stars from controversies and gossips. There have been lots of stories about catfights and animosity between actresses which have taken place in the past. One such famous fight of all time is between actress Karishma Kapoor And Raveena Tondon. If reports are to be believed, at one time both the superstars of the 90s couldn’t see each other eye to eye. In fact, both the divas worked in the cult film Andaz Apna Apna without talking to each other off-camera. 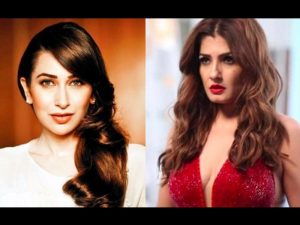 On one of the episodes of Koffee with Karan, director and choreographer Farah Khan was asked about one of the nastiest catfights she has ever witnessed. To this, Farah Khan revealed an incident from the sets of Sanjay Gupta’s film Aatish. I was once doing a song with Karisma Kapoor and Raveena Tandon, long ago, in a film called Aatish. They were both having some kind of teenage spat. They were hitting each other with their wigs.”

Farah added, “They were wearing these wigs with plaits and beads in it. One was hitting, the other was stamping her foot with her heel. It was quite childish. I am sure they will laugh about it now.” 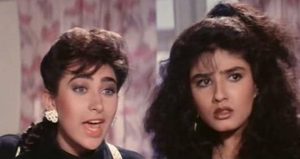 Earlier in an interview with IANS Raveena had revealed that the director of Andaz Apna Apna, Rajkumar Santoshi, and her co-stars Salman Khan and Aamir Khan were tired of their constant fights. “The boys tried to bring Karisma and me together. In fact, in the climax, there’s a scene where Karishma and I are tied to a pillar. Rajji said, ‘We won’t untie you unless you talk to one another,” she said.

Whatever happened in the past but now it seems that all is well between both the actresses thanks to their daughters. “Since our girls go to the same school, we end up bumping into each other and have bonded well. It’s easier to hang out and discuss our kids,” Raveena told Hindustan Times.