Actor Anil Kapoor’s house is all decked up for his younger daughter Rhea Kapoor’s wedding. Every member of the Kapoor family is present at his residence to celebrate and perform the ceremonies. Rhea Kapoor is all set to tie the knot with her longtime boyfriend Karan Boolani. Although the official images are yet to come out of the couple thanks to the paparazzi we are getting a glimpse of the guests coming to the house. 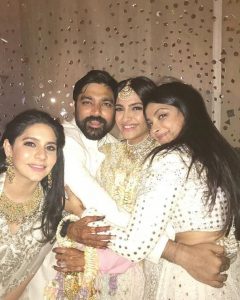 In one of the videos from the wedding, Sonam Kapoor could be seen regal and slaying in a beautiful Anarkali dress along with her husband Anand Ahuja. But the one thing that caught everyone’s attention was Sonam’s attire that made the netizens wonder if the diva is pregnant.

As soon as the video of Sonam Kapoor along with Anand Ahuja was out fans of the actress couldn’t keep calm and started pouring wishes and comments for the couple. A few days back when there was another video that made rounds on the internet where Anil Kapoor was present at the airport to receive his daughter Sonam Kapoor. Both the father-daughter duo got emotional after seeing one another for almost after one year. 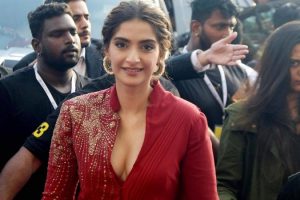 Fans and followers thought Sonam was pregnant in that video too but there has been no official announcement done by the couple. In last night’s glimpses from the wedding, Sonam opted for a subtle green Anarkali suit filled with heavy embroidery and chose emerald and pearl jewelry to match with her dress. For hair and makeup, the diva kept it sweet and simple with minimal products and hair tied in a bun.