Sonam Kapoor Breaks Down At Her Sister Rhea Kapoor’s Wedding; See Pictures Inside

Recently, actress Sonam Kapoor’s sister Rhea Kapoor got married at their Juhu residence in an intimate affair. Anil Kapoor’s younger daughter and producer Rhea Kapoor tied the knot to her longtime beau Karan Boolani. Members of the Kapoor family and people from the film fraternity shared adorable pictures from the wedding ceremony on their respective social media accounts. 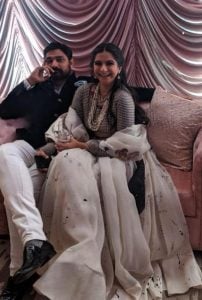 Sonam Kapoor took to her Instagram account and posted a picture with her brother-in-law. She captioned the image and wrote, “You’ve always been family. Your friendship is even more important than your title of being my brother-in-law. But I’m so ecstatic that you are! Love you @karanboolani.”

Sonam even shared a bunch of pictures along with her husband Anand Ahuja with whom she tied the knot in the year 2018. She gave a sweet and shot caption to her pictures with her husband and wrote, “#everydayphenominal”. In one of the pictures out of the many gorgeous photos, she looked emotional while seeing her sister getting married. Her husband Anand Ahuja can be seen keeping his hands on Sonam’s shoulders and comforting her. 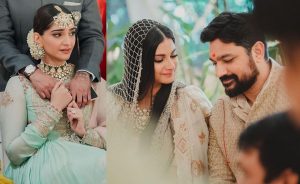 Ace director Farah Khan too shared a video in which veteran actor Anil Kapoor could be seen dancing with Rhea Kapoor. Farah uploaded the video on Instagram and gave it a caption, “Love this man!! Best father-daughter dance @anilskapoor style!! @rheakapoor @kapoor.sunita thank you for being such great hosts congratulations @karanboolani.” 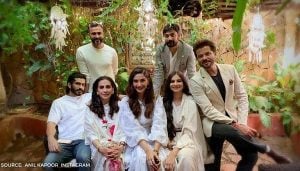 Anil Kapoor too dropped a picture of his entire family and captioned it as, “And with that, I feel like my Magnum Opus is complete…with our 2 super-daughters and 3 super-sons, we have the biggest blockbuster ever! Our hearts are full and our family is blessed,” he wrote.