Pawandeep Ranjan Wins Indian Idol 12; Here’s All What He Has Got As A Reward

On Independence Day, the popular reality shows Indian Idol 12’s marathon finally ended with announcing Pawandeep Rajan as the winner. The show began at 12 pm on 15th August and kept running for 12 hours straight till the winner was revealed.  Along with Pawandeep Rajan as winner Arunita Kanjilal and Sayali Kamble were announced as runner-ups. 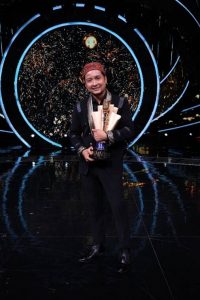 After the period of nine months, the ‘greatest grand finale’ ended which had eminent personalities like Himesh Reshammiya, Anu Malik, and Sonu Kakkar as judges. In an interview with Indianexpress.com Pawandeep Rajan talked about his journey, “Indian Idol is a platform that gives a lot of respect to artists, and the kind of exposure it gets you is unmatched. Through the course of the show, we got to sing so many songs and had the best judges and guests to guide us. The reason I got back in the arena was not my will to win but my quest to learn. And I am thankful that after spending so many months on this show, we are now ready to playback,” he said.

Once Pawandeep Rajan was announced as a winner the judges offered the trophy to Ranjan along with Rs 25 lakh as prize money and also gifted a car. Apart from Pawandeep Ranjan the other finalists of Indian Idol 12 were Nihal Tauro, Shanmukhapriya, Arunita Kanjilal, Sayali Kamble and Mohd Danish. Arunita Kanjilal and Sayli Kamble were declared as runner-ups and were awarded Rs 5 lakh respectively. The third and the fourth runners-up, Mohd. Danish and Nihal Tauro were awarded a cheque of Rs. 3 lakhs respectively. Apart from this, all the 6 finalists got a cheque of Rs Rs. 75,000 along with gift hampers.