The stalwart of the Indian film industry, Rishi Kapoor had left us last year on 30th April. Today is his 69th birth anniversary and his fans and family are remembering the legendary actor. The late actor’s wife and yesteryear superstar Neetu Kapoor took to her social media handle to share an emotional note for her husband who left for heavenly abode after battling cancer. Rishi Kapoor was in New York for a very long tie as he was taking his treatment for cancer. 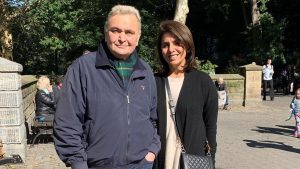 In her post Neetu Kapoor recalled all the high and low moments she has shared with the legendary star, “I learnt a lot from Rishi Ji during our last few traumatic years in NYC… how we celebrated when his blood counts were high, we dined shopped laughed. In his lows, we just stayed home watched TV, ordered in amazing food, and still had some wonderful moments in hope that the next round of chemotherapy he would be better.”

“Hope and being strong is what he taught me .. value each day .. we all miss him today! I can picture how excited he would have been for his 69th birthday! I’m sure he is celebrating with his family up there. Happy birthday Kapoor Saab,” Neetu Kapoor captioned the post along with an adorable picture.

Neetu Kapoor is often seen sharing pictures of herself with Rishi Kapoor along with beautiful anecdotes. On her wedding anniversary this year, Neetu had posted an old picture of the couple and captioned it “Would have been 41 years today,” she wrote.

Rishi Kapoor and Neetu Kapoor have worked together in many super hit films and have shared a blissful married life with each other. Their son Ranbir Kapoor today is a known film star in Bollywood while their daughter Ridhima chose a different path and is a jewellery designer in Delhi.