Mahhi Vij Opens Up On Abandoning Her Foster Kids, Says, “We Have Not Adopted Them, They Have Parents”

Mahhi Vij and Jay Bhanushali are one of the most adored and look upon couples of the telly industry. It was in the month of August 2019 the couple welcomed their daughter Tara. Besides taking care of their biological daughter Tara the couple has also been fostering their househelp’s kids Rajveer and Khushi since 2017. However, earlier this year reports surfaced on social media that the couple has abandoned their foster kids after the birth of their own daughter.

In a recent interview with Zoom, Mahhi opened up about abandoning foster kids Rajveer and Khushi and had stated, “We have not adopted them (Rajveer and Khushi). They have parents. The father is still working with us. They have a mother. It is just that they have stayed with us since the time they were born. They call me mumma and Jay dadda. We were all together. We were like a happy family. There is nothing like legal adoption. I do not know where that came from.”

She revealed that both Rajveer and Khushi have returned to their hometown because their grandfather felt that it will be safer for them to be at their hometown amid the coronavirus outbreak.  In March this year, Mahhi had written a long post addressing the rumours that she had abandoned her foster kids. 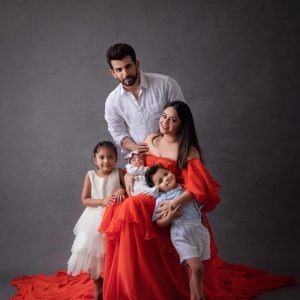 It could be further read as, “When Khushi came into our lives, we became parents but a part of us knows that the decisions and the first rights belong to her father and mother. They had always wanted the kids to spend some time in Mumbai but eventually return to their hometown and be with their extended family and grandparents. And we feel that there is no one who can judge what is better for a child, than their parents.”