Koffee With Karan Special: Drashti Dhami teases KJo about Kangana Ranaut being his “favorite”, check out his reaction

Imperial actors Drashti Dhami, Kunal Kapoor, and Dino Morea will be guests in Karan Johar’s “Koffee with Karan” special. Drashti shared an ad where the actors could be seen laughing, discussing the show, and engaging in regular fast spins.

Drashti shared the video with the caption, “Koffee with Karan. There definitely might be some coffee to spill while we created this grand show! What is it? To know more please watch the special episode of Koffee Shots with Karan.” In the promo, Drashti mentions how Dino and Kunal would always know their dialogues in The Empire. “They would just know their lines and I would be with my script, wondering which line they would be saying.” When Dino was asked about the look that he took on for the historical show, he said, “I followed an animal. I went with a panther.” When asked what he really is, he said, “I’m a puppy. Everyone loves a puppy.” 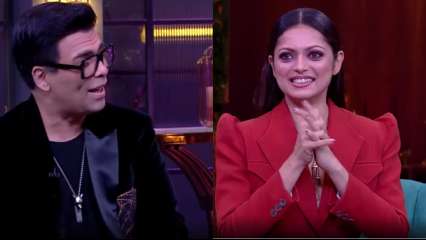 When Kunal, who played the role of Babar in the show, was asked what ‘paigham’ he would send Abhishek Bachchan, he said, “Mere Bhai, kabaddi kabaddi kabaddi, I love you, buddy.” However, maybe the most eye-grabbing moment of the video was when KJo asked Drashti about the female actor who she looks up to. Drashti started, “I think your favorite Kan…” And then she changed to, “Priyanka Chopra.” She was going to say Kangana Ranaut, who last time created a furor on Karan Johar’s show. KJo replied, “I’m just going to keep a straight face.”

KJo also wanted to know who would ‘be the person clicking selfies’ on a battlefield. Kunal answered, “I think that would be you.”

Based on the books by Alex Rutherford, Empire tells the political story of a dynasty during the Mughal era. The show has a strong cast that includes actors Shabana Azmi, Drashti Dhami, Dino Morea, Aditya Sil, Sahkher Bambba, and Rahul Dev, among others. Created by Nikhil Advani and marking the directorial debut of Mitakshara Kumar, who also co-wrote the epic story, Dino plays the devious Shaibani Khan, while Drashti plays his wife, who ends up mocking her. he is at the end. An episode of Koffee With Karan will air tomorrow on Disney Plus Hotstar.