Katrina Kaif’s Workout Post Is Giving Us Major Fitness Goals; Checkout The Inside Gym Video With Her Trainer

Katrina Kaif is one of the fittest actresses in Bollywood and she works equally hard to maintain her fitness levels. From doing Pilates, yoga to lifting heavy weights there’s nothing that this gorgeous diva can’t do. Katrina has often shared her gym videos and exercises with her fans and followers which show what it goes behind in getting those chiseled abs and body. Mostly the celebrities are guided by their trainers about the workout schedules and exercises for which they are acknowledged by the stars on their social media handles. 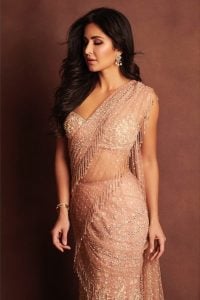 Recently, actress Katrina Kaif too took to her Instagram handle to give credit to her trainer for his efforts and time. Katrina posted a video on her handle in which she could be seen training really hard and gave the post a heartwarming caption, “I train my mind …….my body will follow ….and if it doesn’t then I just call @rezaparkview 😊,” she wrote. Reza Katani is a celebrity fitness trainer who has also trained actors Salman Khan, Jacqueline Fernandes and Sonakshi Sinha.

Katrina Kaif had recently traveled to Turkey to shoot for her upcoming film Tiger 3, which is the third part of the Tiger series. The action thriller film has Salman Khan in the lead role and the cast and crew has already wrapped up the initial portion of the film in Turkey and traveled to Austria for shooting the other parts of the film.

Katrina Kaif has been posting pictures of some of the beautiful destination where she is shooting for the film. In one of her recent posts, the diva could be seen chilling and running around in nature in between the shooting schedules.