There are times when people are so much in love with their favourite stars that they do things to look like them. Then there are people who are naturally gifted with the features and look, which are exactly the same as that of a popular movie star. One such person is Alina Rai who looks exactly the same as Bollywood actor Katrina Kaif. 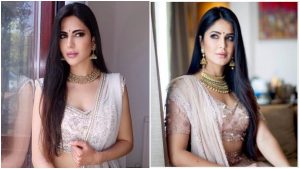 Alina has already finished shooting for her upcoming film ‘Lucknow junction’ which was supposed to release last year but got delayed due to a pandemic. Alina in a conversation with a web portal revealed that she would be playing a journalist in the film.

Not many people know this, but Alina has also worked with famous rapper Badshah in a song called ‘Kamaal’ in the year 2019. Alina is now getting popular with her short videos which she keeps posting on her social media platforms. She mouths some of the dialogues and gives expressions accordingly. Alina’s expressions are also quite similar to Katrina Kaif.

In one of her latest videos, she could be seen enacting on Bigg Boss fame Shehnaaz Gill’s dialogue. Alina could be seen performing the dialogue in her own style. Alina has given this post a short and simple caption “famous hoon”.