Hollywood Star Tom Crusie was recently spotted at the legendary Indian singer Asha Bhosle’s restaurant in United Kingdom’s Birmingham. During his visit to the restaurant, Tom Cruise ordered one of the signature dishes of the place which is also one of the favourite of all the non-vegetarians in India. He chose to relish his taste buds with Chicken Tikka’s and liked it so much that he ordered it twice. 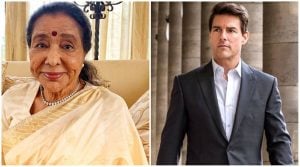 The official account of the singer Asha Bhosale posted about the visit to the restaurant on their page. On Twitter, the singer posted the picture of the biggest superstar of Hollywood posing with the staff of her restaurant. In the post, Asha also mentioned that it was the ‘best praise ever’ as the actor had ordered the meal twice. “It was a joy to welcome @tomcruise to Asha’s Birmingham last night. Tom chose our renowned Chicken Tikka Masala and loved it so much that he requested it again as soon as he finished – the highest compliment,” Asha’s wrote on Instagram.

The singer also stated, “I was very happy to hear that Mr. Tom Cruise enjoyed his fine dining experience at Asha’s (Birmingham) and I look forward to him visiting us again soon.”

As soon as the news started doing the rounds and the post went viral, the netizens couldn’t keep calm and started pouring in congratulatory comments on the picture. Tom Cruise is currently filming for his next film Mission Impossible 7 and decided to stop by at Asha’s while shooting in Midlands.